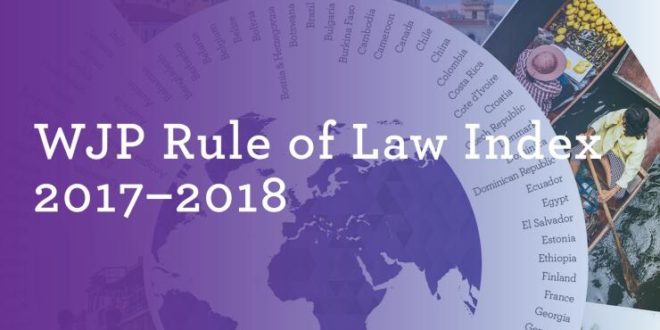 Saint Lucia rose three positions for overall rule of law performance (from 36 in the 2016 WJP Rule of Law Index) to 33 out of 113 countries in the 2017-2018 edition. Its score places it at 6 out of 30 countries in the Latin America and Caribbean region* and 3 out of 36 among upper-middle income countries.

Globally, a majority of countries worldwide saw their scores decline since the publication of the last WJP Rule of Law Index (in October 2016) in the areas of human rights, checks on government powers, and civil and criminal justice.

Regionally, Latin America and the Caribbean’s top performer in the Index is Uruguay at 22nd out of 113 countries, followed by Costa Rica and Chile. Suriname showed the biggest fall in rankings, moving down 10 places to 69th place out of 113 indexed countries worldwide. Three countries in the region experienced negative factor trends in Constraints on Government Powers, while three countries showed positive factor trends in Open Government. Finally, Venezuela once again had the lowest overall rule of law score among all 113 indexed countries.

The WJP Rule of Law Index® is the world’s leading source for original data on the rule of law. The Index relies on more than 110,000 household and 3,000 expert surveys to measure how the rule of law is experienced and perceived in practical, everyday situations by the general public worldwide. Performance is measured using 44 indicators across eight primary rule of law factors, each of which is scored and ranked globally and against regional and income peers: Constraints on Government Powers, Absence of Corruption, Open Government, Fundamental Rights, Order and Security, Regulatory Enforcement, Civil Justice, and Criminal Justice.

“Effective rule of law is the foundation for communities of equity, opportunity, and peace,” said William H. Neukom, WJP founder and CEO. “No country has achieved a perfect realization of the rule of law. The WJP Rule of Law Index is intended to be a first step in setting benchmarks, informing reforms, stimulating programs, and deepening appreciation and understanding for the foundational importance of the rule of law.”