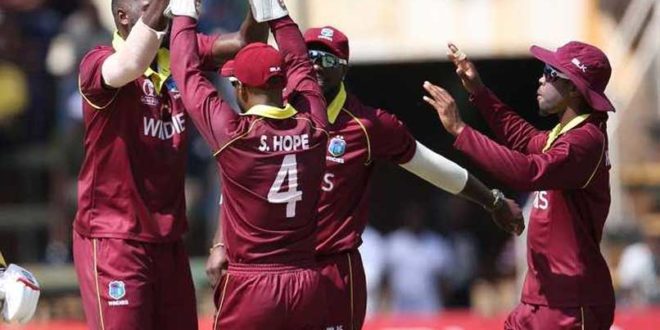 It usually rains on around 191 days a year in Edinburgh, where Scotland play much of their international cricket. Harare Sports Club sees, by comparison, around 73 rainy days a year, and one of those days brought a soggy end to what was shaping up to be a thrilling match between West Indies and Scotland. Chasing 199, Scotland were 125 for 5, five runs behind the Duckworth-Lewis-Stern par score, when the rain came down. The result means West Indies have booked their place in Sunday’s final, and thus the World Cup in England next year.

Storm clouds could be seen in the distance even as Scotland started their chase, and drizzle started to drift across the ground around the 30th over. Shortly afterwards, Scotland, who were already behind the par score, lost Richie Berrington to a controversial umpiring decision, lbw to an Ashley Nurse delivery that appeared to be heading down the leg side. Clearly aware of the need to get a move on, Michael Leask cracked two fours in his 14, but when the rain arrived in force, Scotland were still behind.

While their day ended in heartbreak, Scotland could scarcely have asked for a better start to the match. Opening the bowling from the City End, Safyaan Sharif pitched his first ball on middle and swung it away to find the outside edge of Gayle’s bat. A colossus had fallen, and Scotland were boosted by the belief that, with the Gayle threat safely taken care of, this really could be their day.

Things got even better for them when, with the first ball of his next over, Sharif had Shai Hope caught behind for a duck. West Indies were 2 for 2, and Scotland well and truly had their tails up. On a pitch offering bounce, carry and early swing Marlon Samuels shut up shop while Evin Lewis attempted to play something approaching his natural game. Lewis collected his first boundary with a crunching drive through the covers and, once the shine had been seen off the ball, reasserted himself with a pair of sixes off Alasdair Evans.

Timing wasn’t a problem for Samuels, but he couldn’t hit the gaps nearly as often as he would have liked. One of his straight drives floored Lewis at the non-striker’s end, and Scotland’s cover fielders were kept busy, but Samuels struggled to rotate the strike with any fluency. At the other end, Lewis found his groove and moved through the 40s with a series of sweeps at the spinners. A flowing drive to the cover boundary took him to a 65-ball fifty in the 23rd over, and a dab to third man brought up the 100 partnership soon afterwards. Despite their shaky start, West Indies had laid a platform and all was set for a charge at the death.

Except, it never came. Having extended the partnership to 121, Lewis attempted a huge heave to leg, but missed the ball entirely to be trapped lbw by Brad Wheal for 66. Samuels eventually reached a fifty of his own, but consumed 98 balls for his eventual 51, with 62 of those being dot balls that allowed Scotland’s bowlers to settle into a rhythm. Attempting to make amends for his go-slow, Samuels charged out and carved Leask over the off side, only for Tom Sole to take sharp, sliding catch sprinting around the long-off boundary. With his very next ball, Leask had Shimron Hetmyer caught behind, and the match turned once more.

After that dismissal in the 34th over, West Indies hit just two more boundaries and lost a further five wickets to be all out for 198 in the 49th over. Sharif capped his important early wickets with the dismissal of Rovman Powell before he could do any damage, while Brad Wheal’s double-strike ended the innings. Scotland had bowled out every side they had played in this competition, bar Ireland, who managed to get through their fifty overs nine down. After this performance, it was easy to see why.

Scotland needed to score at a shade under four in their chase, but more importantly they needed a steady start and cool heads. For the first 10 overs, however, neither was forthcoming. In the third over, Kyle Coetzer threw his hands into a fierce cut, but found Lewis at point. In the fourth, a hopping Matthew Cross deflected a brutal lifter from Jason Holder onto his own stumps, and in the seventh Michael Jones fell into a leg trap, hooking Kemar Roach straight to Powell at long leg. In quick time, Scotland were 25 for 3 and suddenly 199 seemed a long way off.

Calum MacLeod and Berrington dug them out of the hole with a steady 42-run stand, foregoing any exuberance for risk-free accumulation. But both men were removed by Nurse, with Berrington’s dismissal proving particularly crucial as Scotland were just beginning to up the tempo as the rain approached. Michael Leask and George Munsey set themselves for a counterpunch, but it was not to be, and the rain arrived to spoil Scotland’s fairytale ending. For West Indies, though, it brought sweet relief.