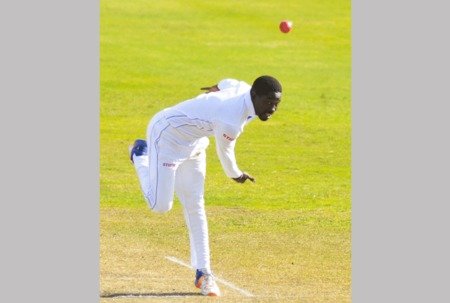 Off-spinner Kenroy Williams was outstanding with four for 36 as the home side, set 310 for victory, collapsed to 174 all out in their second innings – an hour and a quarter before the scheduled close on the final day at the Arnos Vale Sports Complex.

Barbadian Kyle Mayers carved out his second half-century of the match with a top score of 76 while Taryck Gabriel got 33. The remainder of the Volcanoes’ batting failed to display the enterprise required.

The result broke a sequence of poor results which saw the traditionally strong visitors losing one and drawing two of their opening three matches.

Resuming the day on 148 for nine, Pride added a further 23 runs before they were dismissed in their second innings for 171 – 20 minutes into the morning session.

And Volcanoes were quickly in trouble, losing key batsmen to slump to 62 for three at lunch.

Left-hander Devon Smith, the tournament’s leading run-scorer, edged speedster Keon Harding behind to wicketkeeper Mario Rampersaud to fall for seven at 23 for one in the fourth over.

Three overs later, pacer Justin Greaves (2-16) grabbed the first of his two wickets when he bowled Tyrone Theophile for a run-a-ball 19, and when Kavem Hodge was well taken at cover by Williams off Greaves for six, Volcanoes were struggling on 41 for three.

The left-handed Mayers took responsibility for the innings in a knock that lasted 119 deliveries and included nine fours. He put on 55 for the fifth wicket with Gabriel, who faced 129 balls and counted three fours, and added a further 38 for the eighth wicket with Ray Jordan (6), after three wickets tumbled for two runs in the space of 21 balls.

Over at Warner Park in St Kitts, Nikita Miller and Damion Jacobs produced further evidence that spin remains the undoing of Leeward Islands Hurricanes’ batsmen when they bowled Jamaica Scorpions to a 157-run victory.

Left-arm spinner Miller bagged five for 31 from 20 overs, ending with match figures of ten for 87, and leg-spinner Jacobs collected three for 65 from 19.4 overs, as the Hurricanes were bowled out for 144 in their second innings.

At the Brian Lara Academy, defending champions Guyana Jaguars, led by left-arm spinner Veerasammy Persmaul’s nine-wicket match haul, defeated Trinidad and Tobago Red Force by 217 runs to complete their third win of the tournament and maintain their position at the top of the standings. (CMC)