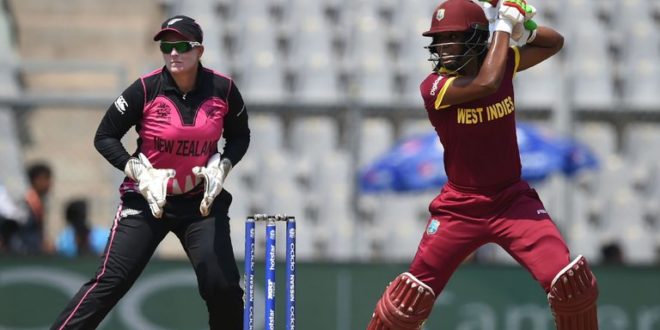 The White Ferns won the toss and elected to bowl first, which proved a good decision for them.

Once again, Hayley Matthews was the first WINDIES wicket to fall. She chased after a wide delivery and was caught at point for 18. Her opening partner, Kycia Knight’s stay at the crease was also short, as she was caught at first slip for 16.

Captain Stafanie Taylor was joined by Chedean Nation and the pair started the urgent rebuild that the WINDIES Women’s innings needed.

Nation was the aggressor of the pair as she took the chances to go after the New Zealand bowlers. Taylor was the tactician, calling for the singles and twos when they were available.

The pair posted a 44-run partnership before Nation fell for 35. This then signaled the slide of the middle order.

Deandra Dottin came in when both her Captain and team needed her hard-hitting and experience, but it was not to be. She gave Leigh Kasperek an easy caught and bowl dismissal. She fell for 10.

Kyshonna Knight came into the wicket and was given a lifeline when she was dropped on 5 but was trapped LBW soon after for 9 to Kasperek. Then Merissa Aguilleira charging down the pitch for a single was caught short of her ground, runout for 0.

Britney Cooper made an 8-ball 0 before becoming Kasperek’s third victim.

Captain Taylor once again had to carry the batting for the team. She reached 86 before she was caught in the 49th over. The WINDIES Women, all out for 194 in 48.1 overs

Bowling for New Zealand, Leigh Kasperek finished with figures of 4/44, while Lea Tahuhu had 3/42.

In their reply, New Zealand got to the target with the loss of 2 wickets. Skipper Suzie Bates smashed an unbeaten 101 not out while Sophie Devine continued her good form from the previous match by scoring 80.

The WINDIES bowlers struggled on an uncooperative pitch to which the White Ferns capitalized. Chedean Nation sustained a minor injury while fielding and is being monitored by the physiotherapist on tour.

Suzie Bates was Player of the Match.