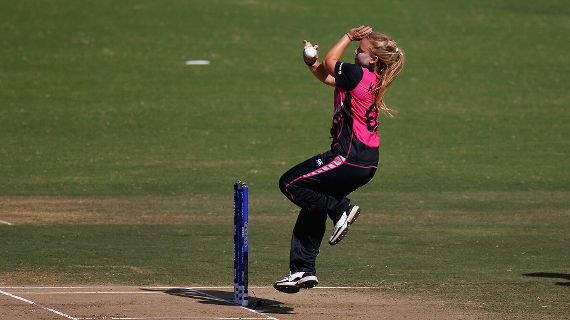 Leigh Kasperek gets into her delivery stride IDI/Getty Images

Spinner Leigh Kasperek‘s three-wicket haul – including the late scalps of Kyshona Knight and Kycia Knight in the space of three balls in the 19th over – proved vital as New Zealand prevailed over West Indies by eight runs in the first game of the five-match women’s T20I series. Kasperek had earlier also accounted for top-scorer Hayley Matthews, out stumped after teeing off for 53 off 31. Kasperek’s wickets ensured captain Stafanie Taylor was neutralised, left stranded on 51.

Taylor built on the platform that was set by Matthews, who dominated an opening stand of 42 with Merissa Aguilleira, to which the latter contributed just 5. However, Matthews’ dismissal triggered a slide, as 60 for 1 became 97 for 4, until Kyshona partnered Taylor for a 56-run stand that took West Indies closer. With 22 required off two overs, Taylor struck Kasperek for six at the start of the 19th. But the bowler recovered to concede just three runs off the remaining five deliveries while picking up two wickets. Akeira Peters used up four deliveries in the final over, by Sophie Devine, before Taylor got strike; by then the equation of 10 off 2 proved too tough even for the well-set batsman.

“We’re really lucky Sophie bowled the over really well, and I guess having the non-established batter on strike helped us too,” Katey Martin, the Player of the Match for her half-century and two stumpings, said. “It was pleasing to get across today.”

Earlier, New Zealand’s top order set them up for a tall score with three solid contributions. Captain Suzie Bates carried over her brutal form from the ODIs and struck 49, before Martin (54) and Amy Satterthwaite (36) consolidated with a 52-run third-wicket stand. West Indies’ bowlers shared the wickets around, but fast bowler Deandra Dottin was the most effective with 2 for 23 in four overs.

“It was pleasing to get out there and bat a little higher up the order today,” Martin said. “The outfield is really super-fast here, so anything that gets through really goes. We did well to set it up and keep the momentum going through, and had a good total on the board that we were comfortable with and felt we could defend.”