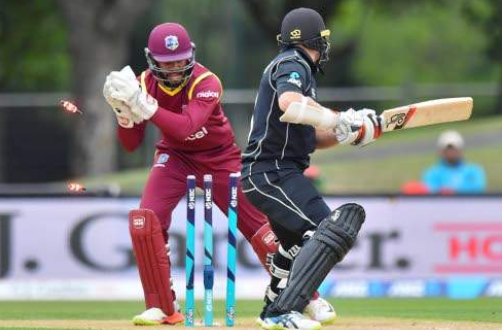 (CMC) – There was no end in sight to West Indies’ misery after they suffered a depressing 66-run defeat in the rain-ravaged third One-Day International here Boxing Day to endure the pain of another clean sweep to New Zealand.

Not even the return of the fit-again Chris Gayle could inspire the Caribbean side as they folded meekly for 99 for nine, chasing a target of 166 in a contest reduced to 23 overs per side at Hagley Oval.

The Black Caps, opting to bat first, were 83 for three after 19 overs when persistent rain halted the match for nearly five hours.

Left with only four overs to face on resumption following the revised playing conditions, the Black Caps got up to 131 for four with Ross Taylor unbeaten on 47 and Captain Tom Latham getting 37.

Left-arm pacer Sheldon Cottrell was the best bowler with two for 19.

In reply, the Windies surrendered without so much as a whimper in pursuit of a revised target under Duckworth/Lewis. They were steamrolled by lethal left-arm seamer Trent Boult who claimed three for 18 and left-arm spinner Mitchell Santner, who picked up three for 15.

He and Boult combined in a devastating new-ball spell to reduce the Windies innings to ruins at nine for five, and only Captain Jason Holder with an attacking 34 from 21 balls managed to resist.

Holder was the only one in the top six to reach double figures, with number nine Nikita Miller (20 not out) the only other player to reach 20.

More dishearteningly, the Caribbean side is still without a win on tour after being swept in the two-Test series and also failing to win any of the warm-ups.

Hoping to salvage some pride after already having conceded the series, the visitors started strongly, reducing New Zealand to 26 for three in the sixth over.

Cottrell got left-hander George Worker (2) to drag on a pull at a short ball in the third over, and Gayle pouched a couple of chest-high catches at first slip to account for Neil Broom (2) and opener Colin Munro (21) off Cottrell and Holder, respectively.

However, Taylor combined with Latham in a 73-run, fourth-wicket stand to rally the innings on either side of the protracted rain break.

The right-handed Taylor struck six fours in a 54-ball knock, while Latham, a left-hander, faced 42 balls while hitting five boundaries.

Unbeaten on 32 when the rains arrived, Taylor led the charge on resumption as the Black Caps gathered 48 off the remaining 24 balls.

West Indies were then quickly in strife, losing Gayle for four to the sixth ball of the innings, caught by Munro running back at point after the left-hander miscued a heave over the infield.

Shai Hope (2) pulled the fourth ball of the next over from Boult to Taylor at midwicket and his older brother, Kyle, departed to the first ball of the following over, lbw to Henry for one.

Jason Mohammed missed a drive at a full length delivery from Boult and was bowled for one in the fourth over, and half of the Windies side were gone three balls later when the Man-of-the-Series strike bowler yorked opener Chadwick Walton without scoring.

Holder arrived to make a fist of it, playing with abandon to strike three fours and a six as he put on 48 for the sixth wicket with Rovman Powell.

But having spent 22 balls over 11 without hitting a single boundary, Powell swung wildly at the next ball he faced from Santner, managing only to top-edge a catch to short third man, and end a promising partnership.

Ashley Nurse (1) was bowled by a Todd Astle googly in the next over and once Holder holed out to cover off Santner six balls later in the 13th over, the Windies’ serious resistance was over.