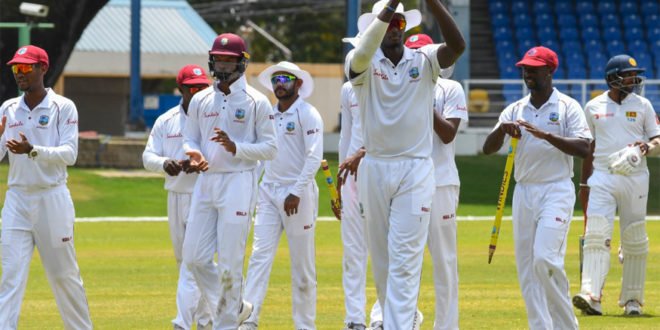 GUWAHATI, India (CMC) — Captain Jason Holder has praised his side’s improved batting effort, despite them suffering an eight-wicket drubbing in the opening One-Day International of the five-match series here Sunday.

Sent in at Barsapara Cricket Stadium, West Indies marched to an impressive 322 for eight off their 50 overs — only the fourth time they have surpassed the 300-run mark since the 2015 World Cup.

They were led by 21-year-old left-hander Shimron Hetmyer who shone brightest with 106, while opener Kieran Powell chipped in with a fluent 51 and Holder, 38.

“I’m extremely pleased with how the guys went out and batted — credit to Shimron Hetmyer on getting a hundred,” Holder said following the match.

“It’s always good to see a young player coming in and doing well. Obviously Kieran Powell got us off to a pretty good start as well and pretty much everyone chipped in from the lower half down.”

Hetmyer, who faced 78 deliveries and struck six fours and sixes, put on 74 for the fifth wicket with Rovman Powell (22) before adding a further 60 for the sixth wicket with Holder.

Shai Hope chipped in with 32 at number three, while tail-ender Kemar Roach frustrated India with an unbeaten 26 at the death.

When they bowled, West Indies got an early breakthrough after debutant fast bowler Oshane Thomas bowled Shikhar Dhawan off the edge for four in the second over.

But Rohit slammed an unbeaten 152 and captain Virat Kohli, 140, in a record 246-run second-wicket stand, which deflated the Windies.

Holder said it is crucial that the Windes take a new look at their bowling plans before the next ODI in Visakhapatnam on Wednesday.

“I felt it was a decent effort up front with the new ball. Obviously on a track like this that’s skidding on when the lights take effect, it becomes a little more difficult,” Holder explained.

“Our spinners weren’t as effective as you would’ve liked them to be so it’s just a matter of us going back and just reassess our plans and try to limit some of their scoring.”

He added: “At the halfway stage I said to the guys [that the score was] probably par, and it was a matter for us of using the new ball as best as we possibly could.

“We got an early breakthrough but credit to Kohli and obviously Rohit, they played outstanding innings and really took the game away from us, and they batted right through to the end.”

Holder was probably the most economical bowler, going at just over 5-½ an over as the remainder took a battering from Kohli and Rohit.

Thomas bowled with pace but leaked 83 runs from his nine overs — the most runs ever conceded by a West Indies player on debut.

Holder said the attack had lacked the sharpness to make the necessary inroads.

“Looking back in hindsight, we needed one or two more partnership-breakers and you never know, we could have been back in the game.”