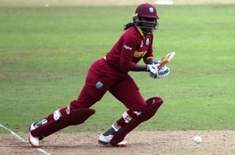 Windies narrowly miss out despite Taylor 90

Asked to chase a challenging 279 at the Bert Sutcliffe Oval, West Indies ended on 277 for nine off their 50 overs with Taylor carving out a top score of 90 off 93 balls.

The Caribbean side required 11 runs from the last over with Kyshona Knight and tail-ender Tremayne Smartt (5) at the crease, but only managed to eke out nine after losing Smartt and failing to get the four runs required for victory off the final delivery.

Kyshona Knight chipped in with a busy 44 off 31 deliveries while twin sister Kycia Knight, struck a patient 38 at the top order and Chedean Nation, 29.

Sent in earlier, the White Ferns had earlier piled up 278 for nine off their 50 overs, with veteran Sophie Devine striking 108 — her third One-Day century — and opening partner and Captain Suzie Bates getting 44.

It was the opening stand between Devine and Bates which put New Zealand on their way, as they added 76 to deny West Indies any early success.

Matthews got the breakthrough in her third over — the 15th of the innings — when Bates’ paddled swept an ordinary delivery to give Nation a simple catch, standing next to the square leg umpire.

The Windies failed to capitalise, however, as Devine anchored two successive half-century stands to keep New Zealand on top.

First, she put on 60 for the second wicket with Amy Satterthwaite, who made 27 off 34 deliveries, before pulling Fletcher to square leg where Matthews took a sharp chance.

Katey Martin (22) then joined Devine to add a further 63 for the third wicket, a stand which took the hosts to the verge of the 200-run mark.

However, once Martin perished in the 35th over, lbw to seamer Deandra Dottin, New Zealand lost seven wickets for 52 runs to decline.

She eventually departed, stumped by Merissa Aguilleira after missing a charge at Fletcher in the 37th over.

In reply, Windies Women lost Matthews cheaply for 18 off 19 balls with three fours, bowled off the fourth ball off seamer Holly Huddleston’s (2-40) opening spell, after being kept scoreless off the first three deliveries.

The right-handed Taylor, arriving at number three, then hauled her side back into the contest in an innings dotted with eight fours and a six, as she put on 57 for the second wicket with Kycia Knight and a further 64 for the third wicket with Nation.