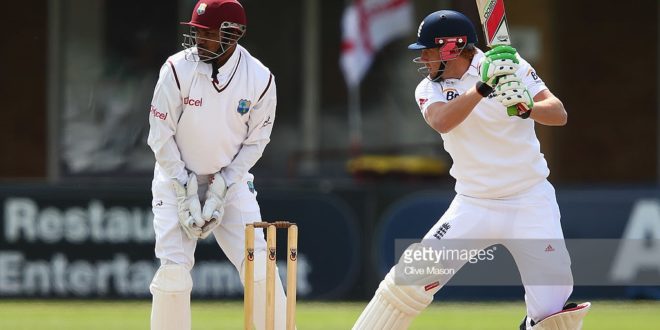 Chasing a competitive 273 at Coolidge Cricket Ground, debutant Hain struck a brilliant 144 to rescue Lions after their innings lay in shambles at 165 for nine in the 36th over.

He staged a last-wicket stand of 102 with Matthew Parkinson (15) which left Lions requiring eight from the final over with nine wickets down.

However, the 22-year-old Hain then lofted the third delivery of the over to Raymon Reifer on the long-on  boundary, to end the innings with Lions just short of their target.

Hain, batting at number three, produced a brilliant effort which required 122 balls and contained a dozen fours and five sixes.

He was supported by opener Nick Gubbins who made 54 but Lions suffered a massive batting failure and the only other batsmen to reach double figures were number 10 Richard Gleeson (13) and last man Parkinson.

The visitors were undone by 20-year-old seamer Keemo Paul who just missed out on a hat-trick as he finished with five for 49, while off-spinner Rahkeem Cornwall claimed two for 38.

Test star Jermaine Blackwood had earlier fallen short of a hundred with 99 while Cornwall made 44 and Andre McCarthy, 33, as Windies A rallied to 272 all out with a ball remaining, after opting to bat first.

Captain Kieran Powell (24) lost opening partner Chandrapaul Hemraj to injury in the first over with the score on eight but combined with Blackwood to put on 54 for the first wicket.

The left-handed Powell had faced 25 balls and counted four fours when he picked out his opposite number Keaton Jennings at short cover in the ninth over off seamer Paul Coughlin, (2-55) and Chase fell to the very next delivery courtesy a brilliant diving catch by wicketkeeper Alex Davies.

However, Blackwood played responsibly, anchoring a series of partnerships to get Windies A up to a credible total.

He added 44 for the third wicket with McCarthy, put on a further 68 for the fourth wicket with Cornwall before also posting 38 for the fifth with Jahmar Hamilton (14) and 40 for the sixth with Reifer (16).

All told, the right-handed Blackwood faced 115 deliveries and struck five fours and three sixes, before driving leg-spinner Matthew Parkinson (2-33) to Jennings at short cover in the 44th over.

Cornwall had earlier blasted six fours and one six in a 37-ball cameo before missing a heave and being sharply stumped in the 30th over.

In reply, Lions had a strong start as Gubbins added 31 for the first wicket with Davies (6) before posting another 52 for the second wicket with Hain.

The innings lay in good stead at 83 for one in the 14th over but Paul’s introduction triggered a sensational collapse which saw five wickets tumble for just 10 runs in the space of 27 deliveries.

Cornwall claimed Gubbins to a catch by Odean Smith at short fine leg but it was Paul who broke the back of the innings in the 16th over when he knocked over Sam Northeast (1), Jennings (0) and Sam Curran (0) in quick succession.

Curran survived the hat-trick delivery only to fall to the next ball, top-edging a pull to be caught by Powell.

Slumping at 128 for eight in the 26th over, Lions were spared embarrassment by Hain who put on 37 with Gleeson for the ninth wicket before producing a valiant last-wicket effort with Parkinson.