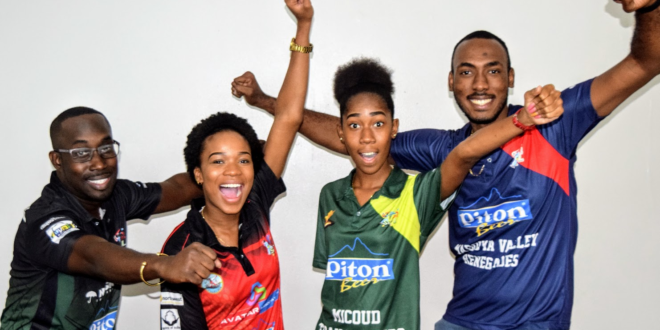 Castries, Saint Lucia, May 10th, 2018: The 2018 edition of most exciting cricket tournament in Saint Lucia is just weeks away, and the excitement is mounting. Eight community-based franchise teams will contest the Flow Saint Lucia Premier League (SPL) T20 tournament, which will run from June 1-17. And now, patrons can truly represent their teams by winning replica jerseys from title sponsors, Flow.

To enter for a chance to win, Flow mobile customers just have to download the Flow Sports App and stream any content free via a Flow mobile data plan or free via WiFi. Each week in the month of May, two new winners will be announced.

Users of the Flow Sports App, which enables access to the channel Flow Sports 1 via your phone, tablet, or desktop, have been able to watch the CARIFTA Games, Indian Premier League cricket, and commonwealth Games at no extra cost. On Saturday, they will be able to watch Saint Lucia’s Commonwealth Games champion, Levern Spencer, in IAAF Diamond League action from Shanghai, China.

Chairman of the SPL Organizing Committee, Hassan Euristee, has expressed his delight at this latest wrinkle to what has fast become, in the space of just one year, one of the most anticipated sporting contests on island.

“We started the SPL with big goals and lofty ambitions. This year, we have three senior West Indies cricketers in the competition, and we envision a day when our local players will be able to compete against even more international talent. This edition will be streamed live on our Facebook page via flow 4G LTE, the fastest network on island, but one day we would love to be on Flow Sports as well!

“The Flow Sports App is a godsend for real sports fans. You can enjoy live coverage of CFU football, the Emirates FA cup, the IPL, IAAF Diamond League, the English Premier League, tennis, rugby and so much more, plus the latest scores and sports news. And it’s absolutely free! I would certainly encourage players, administrators and fans to get the app and get a chance to win a 2018 SPL jersey.”

The second iteration of SPL marks the beginning of what promises to be a mutually fruitful relationship. Flow, Saint Lucia and the Caribbean’s leading telecommunications service provider, will provide cash support as well as boosting the fledgling semi-pro league’s mobile and internet needs.