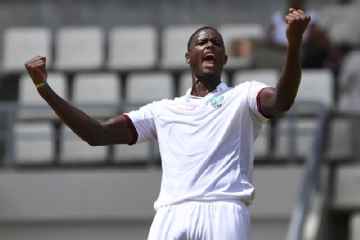 Wickets for all as West Indians take large lead

After a satisfactory batting performance on the first day in Lincoln, the West Indians produced a solid bowling effort to dismiss New Zealand A for 237 on the second. They used eight bowlers and all of them picked up at least one wicket, to earn a first-innings lead of 214.

The visitors declared their first innings overnight on 451 for 9, and made good use of the early morning bowling conditions. Kemar Roach dismissed Test opener Jeet Raval for 1, and Jason Holder accounted for the other New Zealand Test opener, Tom Latham, for 24.

New Zealand A slumped to 114 for 6, before Tom Blundell and Todd Astle put on 64 for the seventh wicket. Shannon Gabriel broke that stand with his only wicket of the innings. Astle top scored for the home side with 68 and they were eventually dismissed in 61.4 overs. Raymon Reifer took 2 for 27, while Roston Chase picked up 2 for 7.

The West Indians lost two early wickets in their second innings, but Kraigg Brathwaite was unbeaten on 33 and had steered his side to 53 for 2 at stumps.