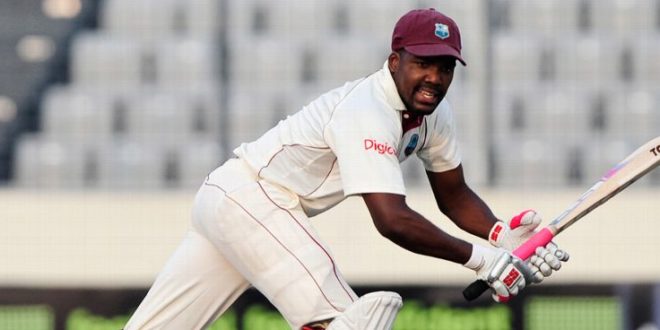 Darren Bravo's maiden Test hundred was so nearly a double

‘Whenever Lara gives me advice, I’m guaranteed to score runs’

[ESPNcricinfo] Name a batsman you feel very comfortable seeing at the other end.
Kieron Pollard. We both grew up playing at the Under-13, U-15 and U-19 level. We went on to represent West Indies together. He understands the game very well. Whenever we bat together, we always have a pretty good partnership. He is someone that I really enjoy batting with.

Two bowlers who challenge you.
I think Saeed Ajmal, the offspinner from Pakistan, was difficult. Wahab Riaz is very aggressive. On his day he is unplayable, you can’t get the better of him. He is someone you have to keep an eye on.

There have been a few innings in the CPL in which you have hit six or seven sixes. Do you pick a zone to hit sixes?
Everyone who knows me knows that I like to hit straight. I believe in playing with the full face of the bat, which gives you a better chance to capitalise. Whenever I go for a big shot, I tend to target the straight boundaries.

What do you remember about the first cricket match you saw at a ground?
I remember going to the Queen’s Park Oval when West Indies were playing England. I sat on the cycle track. They invited [boys from] the Santa Cruz Cricket Club’s coaching clinic, where I am from, to watch a game at the Queen’s Park Oval. I think that’s my first memory.

What do you admire in him?
Other than being a world-class batsman, what I most admire about him is the fact that when I am not doing well at my game, I can pick up my phone to message or call him and he is always willing to give advice. Whenever he gives me advice, I am guaranteed to score runs in the next innings. He is always my go-to guy when I am under pressure. On any given day, he will just message to find out if everything is okay, not only cricket-related. He is always looking out for me and I appreciate that.

“Before I started playing, my goal was to play 100 Test matches, which is something I want to achieve”

How does a batsman feel when he gets out for 195? How different is it to scoring a double-hundred?
The 195 was my first Test hundred. When I was on 175, the coach sent a message: you have four overs to get your double-hundred otherwise we are going to declare. I needed 11 runs in the last over. I think I hit a six off the second ball, after which Shivnarine Chanderpaul came down the wicket and said, “Hey you need to get to your double-hundred this over.” I sort of panicked. I tried to go for another six. In hindsight I should have taken my time. I am sure the coach would have given me another over.

I knew that I was capable of batting long and getting big scores. I was really happy to get a double-hundred against New Zealand – tough conditions against a world-class bowling line-up. It was probably my best innings so far.

What’s your favourite international innings?
My first Test hundred at my home ground, Queen’s Park Oval. It was against New Zealand again.

What is the funniest thing you have seen happen on a cricket field?
West Indies v India: I think it was a water break and I believe Sachin [Tendulkar] was batting. One of the groundsmen came to paint the crease. I am not sure whether he was seeing Sachin close-up for the first time, but he actually fainted on the field.

Dwayne Bravo might claim to be the better dancer, but is there something you do better than him outside the game?
I think I tell better jokes.

What are the three things you would take to a desert island?
My phone, medication, and the book Driven From Within by Michael Jordan.

If you were to face three bowlers from before your time, who would they be?
Wasim Akram, Curtly Ambrose and Shane Warne.

What milestone do you want to achieve before you finish your career?
Before I started playing, my goal was to play 100 Test matches, which is something I want to achieve.

Have you ever hit Sunil Narine for a six?
I have hit him for a couple of sixes. He got me out on a few occasions as well. We always have a good battle. I think he is a fantastic bowler.

Is there a shot you have tried to play but not successfully?
The on-drive.

How well do you play the one-legged pull shot?
I don’t think I am the strongest at it. I don’t like to play it early in my innings. But as the innings progresses, I can play it comfortably.