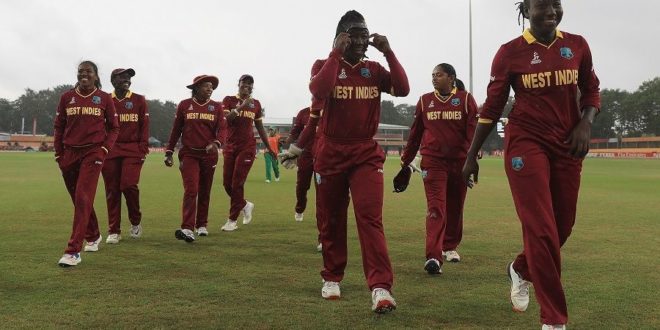 Rather than a Dickensian narrative, the intervening period between West Indies women’s last two World Cup campaigns lends itself more seamlessly to the German novelist and playwright Gustav Freytag’s analysis of the five-act dramatic plot structure: exposition (a promising 47-41 win-loss ratio in the build-up to the 2013 World Cup), rising action (finishing runners-up in the 2013 World Cup), climax (clinching the 2016 World T20), falling action (finishing sixth among eight teams at the 2017 World Cup with only two victories), d nouement (the following dissection of the previous four acts).

As they prepare to play Sri Lanka in the opener of the ICC Women’s Championship’s second cycle on October 11, Stafanie Taylor, the captain, tells ESPNcricinfo how crucial it is to clean-sweep the three-match series in the wake of a “disappointing” World Cup three months ago.

“Not just me, but everybody was disappointed with our campaign – especially the fans,” Taylor says. “Apart from the points, winning all of these three games is vital for them; it could help us revive our fans.”

It’s no surprise that Taylor attaches so much currency to the fans’ perception. In last year’s World T20, the team fought their way through tears to live out the perfect ending to the underdog story at Eden Gardens on April 3 and enthralled cricket-lovers the world over with a collective display of might. After all, dethroning the Australians requires rallying around each other as a unit and fierce team-work (unless your surname is Kaur).

The follow-up to the 50-overs World Cup, however, has been starkly different so far.

Like any other instance of a dismal campaign at a world event, the aftermath of West Indies’ World Cup performance prompted the axing of the team’s management, including head coach Vasbert Drakes who had overseen the side even at the World T20 in 2016 after his appointment the previous year. Weighing in on the management restructure, Taylor said the team can only “accept, adjust and adapt to” such uncontrollables. 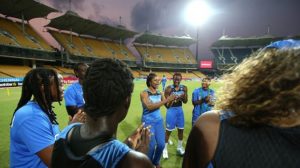 “I’m not sure why a decision like that was made. A few players may have been a bit disappointed [with the decision], given we were close to the previous management. To see how it happened is a bit disappointing, but these are things we can’t control. They [the board] did what they had to do, and I am not in a position to question the board on whom they fire and hire.”

A scrutiny of their performance in the 50-overs format in the recent past reveals an anomaly that’s hard to overlook. Between their first Women’s Championship match in May 2015, through to the end of their World Cup campaign in July this year, West Indies lost 14 of their 26 games and were bowled out ten times inside 50 overs during those losses. Only in three of the remaining four defeats, did they manage to bat out the entire innings. Taylor, who took over the leadership reins from Merissa Aguilleira in September 2015, led the side in 12 of those 14 losses. However, she lost only thrice in her 15 T20I assignments, during the period, with one ending in a tie.

Identifying reasons behind conceding big-margin defeats in ODIs requires the team and the board to look both without and within. Taylor believes a mix of technical frailties produced by inadequacies in the domestic set-up, clubbed with some sort of mental inhibition have been at the heart of their struggles in 50-overs cricket.

“That mindset of batting through a whole day, which essentially means 100 overs, can be developed only when we play more longer-format games – both at the international and domestic level.

“We need to play more 50-overs cricket. Yeah, we might be a good T20 team, but we play ODIs as well. We need to have more game time in that format so we can improve. I did have some conversation with the board regarding having three-dayers and four-dayers in the longer format, just to try and get that temperament stronger.”

With 22 points from 21 matches, West Indies narrowly evaded having to grind it out in the qualifying tournament for this year’s World Cup, after earning automatic qualification through a fourth-place finish in the inaugural Women’s Championship.

Taylor’s assessment of the team’s struggles rules out any insecurity borne out of non-performance, though. “If you look at the structure of our team, most of us, except maybe for two or three players, have been in the team for close to three years. Some of us have been together for a long time, around seven years. So I don’t think there is any insecurity at the back of their minds. However, as players we need to be honest with ourselves, and ask, ‘Are we doing enough to stay in the team?'”

When asked if the management has tried to identify players who may be better suited to the different styles of play required in the two limited-overs formats, Taylor’s response was grounded in reality, albeit one that doesn’t bode well for the health of women’s cricket in the West Indies and in general.

“We haven’t been able to narrow down to any such player so far. It’s kind of hard to choose seven to eight players separately for ODIs and T20s, because we don’t have a substantial pool of players.”

“It’s not the best. Every year we come together for a tournament that lasts for about three weeks. That’s definitely not good enough to try and build international players and even younger players coming through.

“We need to structure our cricket here better. If we can get it right, we could definitely get better as a 50-overs side. Our regional cricket is not so good, so a set-up needs to be put in place to create a pool of youngsters.”

Elaborating on the paucity of “polished” players in the domestic inventory, Taylor, who hails from Jamaica, cited the Kiddy Cricket programme – a flagship initiation programme managed by the West Indies board at the primary-school level – as one that could be used as a template for building the senior side. Having produced men’s international cricketers such as Kraigg Brathwaite, Shai Hope, Roston Chase and Jermaine Blackwood, along with women’s fast bolwers Britney Cooper, Kiddy Cricket has been catering to both genders since 1999 – much before women’s cricket was integrated into the operations of the West Indies board in 2006.

“In Jamaica, Kiddy Cricket has yielded players as young as five and six from primary school. If you ask some random kid in the country if they’ve played Kiddy Cricket, they’d say yes. The structure is there, so maybe West Indies could have a set-up at a bigger level like that.”

Echoing Taylor’s thoughts on the need for an overhaul of domestic cricket, Aguilleira, the former captain, underlined the non-uniformity of cricketing engagements across the Caribbean as being detrimental to the national side’s growth.

“The depth of cricket in different parts of the Islands is not the same. In Trinidad and Tobago, my country, there’s cricket through the year: the Under-19s, the secondary-school [competitions]. So the younger girls are able to experience cricket in the form of T20 competitions, the 40-over games, and the knockouts. We even have some of the other girls coming over [to our island] and playing in our competitions. But not all the countries have a proper set-up to sustain the players. When you think about the level of domestic cricket being played there, it’s not something that could compete with the Australians and the English set-up.”

Aguilleira, who captained the side to the final of the 2013 World Cup and the semi-finals of the Women’s World T20 in 2010, 2012 and 2014, sounded a note of caution over finding replacements following the future retirements of senior players.

“If you look at the age group of the current West Indies players, a bunch of them will be going out at the same time. You don’t want a scenario where the team’s moving but there’s nobody to fill their place. So that’s something Cricket West Indies could look into and ensure the younger generation is nurtured.”

Aguilera further pointed to “inadequate mental preparation” and a lack of match fitness in the lead up to the World Cup as reasons for the team’s underwhelming performance.

“We really need to be mentally tough; cricket is just so far beyond just your skills and your fitness level. Because we’re from different countries, we don’t come together as a team regularly enough. It’s just that [five-day] camp we had before the World Cup. So it’s vital we get to play more cricket together as a team and not just in our respective countries. That’s how we can identify our problems, fix those and be mentally ready.”

In a little over a year West Indies will be defending their World T20 title on home soil, but for now the significance of the Championship games, Aguillera said, is not lost on the side.

“As professional cricketers, the team understands the requirements of the different formats. As defending champions, we know how important the World T20 is for us. But we’ve also been a side who’ve dominated in 50-overs cricket.

“We were 2013 finalists and I think that hasn’t gone beyond us. We’re still fresh and thinking about those situations. It’s only about blocking out the negative and getting back on the winning ways with help from Hendy Springer [head coach] and Mr [Gus] Logie [assistant coach], and this series could well initiate that.”

Considering her team’s history of overcoming the odds and emerging champions, despite the system, that might not be mere fanciful thinking.