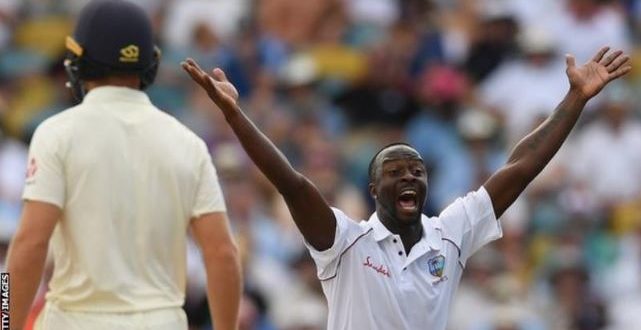 BBC- England were bowled out for only 77 as an inspired West Indies seized control of the first Test in Barbados.

Keaton Jennings top-scored with 17 in the lowest total in Test history at a raucous Kensington Oval.

West Indies, who led by 212 on first innings after being dismissed for 289 before lunch, chose not to enforce the follow-on.

England’s collapse came 10 months after they were skittled for 58 by New Zealand in Auckland.

Yet the manner in which they folded against a side who sit above only Bangladesh and Zimbabwe in the International Cricket Council rankings was worrying in the extreme.

It was another graphic example of a trait which has undermined England’s cricket over the past two years.

Arguably more importantly, they appear no closer to solving their batting problems with only two more five-day Tests to play before the Ashes against Australia in August.