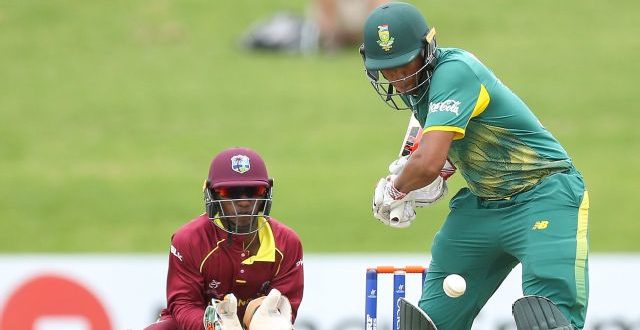 West Indies Under-19 go down to South Africa Under-19

South Africa joined New Zealand as the second quarter-finalists from Group A after they dumped defending champions West Indies out of the Under-19 World Cup in Mount Maunganui.

The result capped off an incredible evening, where South Africa were comfortably behind the game for the first 40 overs after being put in. Then, in a ferocious display of lower-order hitting, wicketkeeper Wandile Makwetu made an unbeaten 99, with 37 of those coming in the last three overs off which South Africa blasted 58. The last 10 overs fetched 112 as they posted 282 for 8.

On a cold, rainy evening where there was enough moisture underneath the surface, South Africa’s pace bowling trio of Gerald Coetzee, Thando Ntini and Akhona Mnyaka came hard at West Indies. By the 21st over, the top four were dismissed for 87. As the asking rate spiralled, Kirstan Kallicharan and Alick Athanaze fought back to put together 90 for the fifth wicket to bring the target close to double digits.

But in a bid to hit out, Kallicharan, who oozed class and confidence in his 50-ball 44, was trapped lbw by medium pacer Hermann Rolfes off the third ball of his new spell in the 39th over to leave West Indies 177 for 5. It left the lower order needing to rally around Athanaze.

But they had other ideas, looking to tee off instead of rotating strike and bringing the well-set batsman back on strike. This resulted in two more wickets in quick succession that helped South Africa close out the game. Athanaze, who took a while to set himself in and consolidate to make his second youth ODI half-century, was the ninth man out for 76, trying to take it upon himself to inch closer to the target.

It left West Indies wondering what may have been had the middle order shown a little more application and better shot selection. The final nail was drilled by Coetzee in the 46th over as their campaign went pear-shaped with one to play. This meant a potentially high-voltage match between New Zealand and South Africa on Saturday was reduced to a dead rubber.

South Africa had started cautiously and had progressed to 77 for 2 by the 18th over when the game came alive courtesy a controversial decision. West Indies had opener Jiveshan Pillay out obstructing the field when they appealed for what seemed a harmless pick-up of the ball from the batsman after it had stopped besides the stumps off an inside edge.

This led to a break in play for four minutes as the third umpire deliberated the matter with the on-field umpires. Pillay, who carefully constructed 47 to keep South Africa chugging along, accepted the decision and walked back without a trace of dissent even as most at the ground were stunned by the very basis of the appeal, even if West Indies were within their rights to make it.

South Africa’s lower middle order didn’t let this passage of play distract them. While run-scoring was difficult, they took the innings right till the end. In what turned out to be a game-changer, Jeavor Royal put down a sitter at deep midwicket to reprieve Makwetu on 49 in the 44th over. He would go on to smash 50 more in an exhilarating passage where West Indies’ bowlers kept missing their lengths.