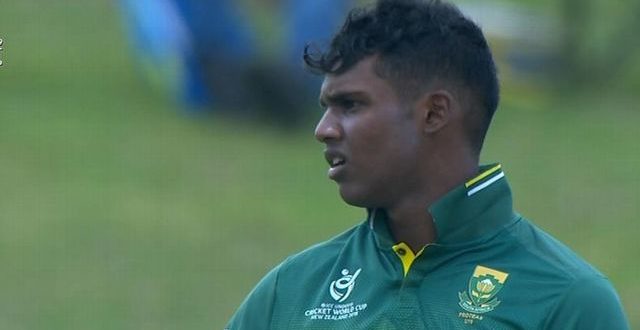 [ESPNcricinfo] West Indies have once again ignited the spirit-of-cricket debate at the Under-19 World Cup, when they appealed against South Africa opener Jiveshan Pillay for obstructing the field in their Group A fixture in Mount Maunganui.

Emmanuel Stewart, the West Indies captain and wicketkeeper, made the appeal after Pillay picked up the ball close to off stump, even though it was stationary after rolling off an inside edge. The third umpire Ranmore Martinesz was called in and the decision went in West Indies’ favour after a long wait and a number of replays. The incident occurred in the 17th over of South Africa’s innings, when they were 77 for 2.

Once the decision was referred to the TV umpire, it was going to be difficult to give the batsman not out unless Stewart and West Indies withdrew the appeal. Law 37.4, which deals with ‘returning the ball to a fielder’, states: “Either batsman is out obstructing the field if, at any time while the ball is in play and, without the consent of a fielder, he/she uses the bat or any part of his/her person to return the ball to any fielder.”

South Africa Under-19 coach Laurence Mahatlane was measured in his reaction during the innings break. “Our take is very simple: we play to the laws of the game and it’s part of the laws,” he said. “It’s happened and hopefully we’ll learn for a long time from it.”

West Indies’ actions in this game are likely to be debated widely, as they were at the 2016 World Cup when their bowler Keemo Paul effected a mankad to dismiss Zimbabwe’s last wicket – Richard Ngarava – to win a must-win group game. They eventually went on to win the tournament. West Indies were in a must-win position against South Africa in this game too, having lost their tournament opener against New Zealand.

In 2016, former West Indies fast bowler Ian Bishop had defended the U-19 side against criticism for the mankad, but he was less supportive of this obstructing-the-field dismissal.

“This is an unfortunate issue,” Bishop, one of the commentators at the game, told Fox Sports. “The batsman isn’t trying to gain an advantage. He is not trying to being unfair. The umpires have done what they need to do. The ball has stopped. It’s not threatening the stumps. I don’t really necessarily feel as if that’s a good law. It could take a re-look.

“The batsman is not trying to gain an unfair advantage. All he is trying to do is help out the fielding team. I would have to have a deeper look at myself if I was the fielding captain. Can I use some discretion here for the sake of the game and whatever the spirit of the game means? I wouldn’t have gone that way. He’s obviously a bright kid and he understands the letter of the law. On this occasion it’s slightly different for me compared to the last World Cup.”