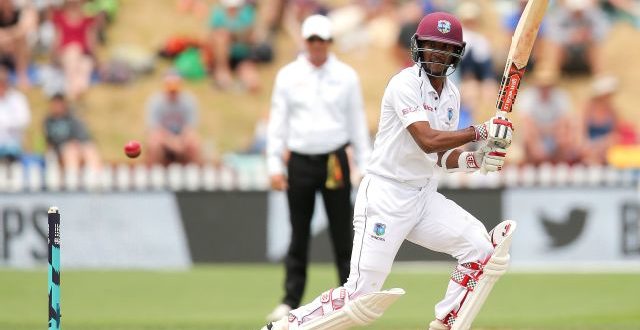 New Zealand hurtled to a profoundly commanding position in the first seven sessions of the Wellington Test, but the opposition began to resist on the third day. West Indies were still a long way back – 172 in arrears with two second-innings wickets already spent. But thanks to Kraigg Brathwaite‘s fortitude, a spark from Kieran Powell, and a little flash from Shimron Hetmyer, their hopes of making something out of this match are not yet extinguished. Brathwaite remained at the crease on 79, with Shai Hope for company.

But perhaps this was always going to be a batting day – the Basin Reserve pitch tends to flatten dramatically as matches wear on. In the morning, Tom Blundellhad progressed from an overnight 57 not out to triple figures, becoming the first wicketkeeper-batsman to make a debut Test century since Matt Prior in 2007.

What was remarkable was that he scored 52 of his eventual 107 not out in the company of Trent Boult – the pair putting on an unbeaten stand of 78 for the last wicket. Soon after Blundell reached his century, New Zealand declared on 520 for 9, taking a 386-run advantage into the second innings.

Few might have expected West Indies to claim momentum as dramatically as they did after lunch, however. If one aspect of play epitomised the vigour they brought to those sessions, it was their bristling confidence when facing their tormentor from the first dig: Neil Wagner. On day one, Wagner had collected 7 for 39 in 14 overs, as batsmen almost raced each other back to the pavilion.

On Sunday, Wagner again deployed his familiar lifters from around the wicket, but suddenly, the West Indies top order was almost disdainful of the tactic, pulling, hacking, and cracking him through the leg side throughout the afternoon and evening sessions. Wagner was left nursing figures of 0 for 89 from 15 overs by stumps, having suffered 14 fours and two sixes. Unable himself to make a breakthrough, Trent Boult was also visibly frustrated by the closing stages of the day.

That it is around their senior opener that West Indies’ resistance built was unsurprising. Brathwaite did as Brathwaite does, leaving judiciously, defending solidly, and awaiting the bad balls to dispatch to the fence. His two early boundaries were the result of wayward leg-side deliveries that he simply nudged fine. He was a little more ambitious in the evening session, even running at Mitchell Santner to launch him over the deep midwicket boundary.

His patience and assuredness at the start of the innings allowed Powell to take risks at the other end. It was Powell who began the assault on Wagner by hitting two sixes and a four off consecutive Wagner balls. Having survived a close lbw shout off Boult early in his innings – a not-out decision that would have been overturned had New Zealand reviewed – Powell went on to make 40 off 55 balls before losing concentration and giving Matt Henry a simple return catch.

Hetmyer’s 66 was sprightly and attractive, as he and Brathwaite combined for a second-wicket stand worth 94. Having been reprieved via a batting review on seven, Hetmyer took to playing Wagner with particular aplomb, driving and pulling imperiously. He didn’t always keep his shots on the ground, but found empty space whenever he went aerial, once lofting Boult for a straight six with sublime timing. That Boult over, the 42nd of the innings, also featured two Hetmyer fours: down the ground, and over midwicket.

Like for Powell, it was a misjudgement of Henry’s pace that brought his wicket, after the tea break. Attempting to turn Henry towards the leg side, Hetmyer succeeded only in sending a leading edge to extra cover.

Hope and Brathwaite ensured there were no further wickets before the end of the day by showing a little reticence as stumps drew near, but the bad balls were still punished. All up, day three saw 287 runs scored for the fall of just two wickets. New Zealand will hope to get early breakthroughs on day four, to ensure the match does not progress to a fifth day, but if West Indies bat as they have so far in the innings, victory will have to be hard-won, for New Zealand.