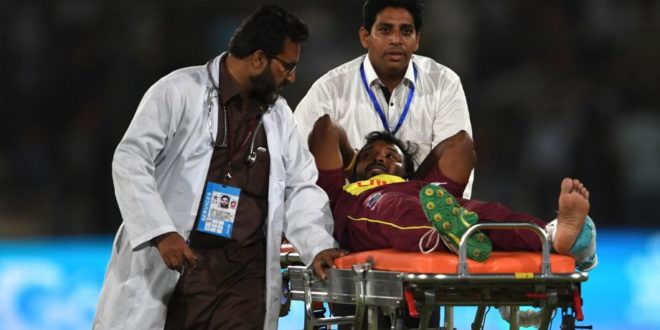 [ESPNcricinfo] West Indies spinner Veerasammy Permaul will play no further part in the ongoing series against Pakistan because of a ruptured muscle.

Permaul, 28, had bowled just three balls on his T20I debut at the National Stadium Karachi on Sunday before he pulled up with a twisted left-ankle. He received treatment for several minutes by the physio before being stretchered off the field. He was taken to a local hospital, and did not bat in the second innings.

This stretches an already thin West Indies touring squad to just 12 available players, and given the series ends on Tuesday, it is extremely unlikely a replacement player will be called up.

That means West Indies are set to hand a maiden international cap to one of Odean Smith or Andre McCarthy, the two players left out of their playing XI on Sunday.

West Indies will be looking to bounce back from a heavy defeat in the first game, where they were shot out for 60 chasing 204.