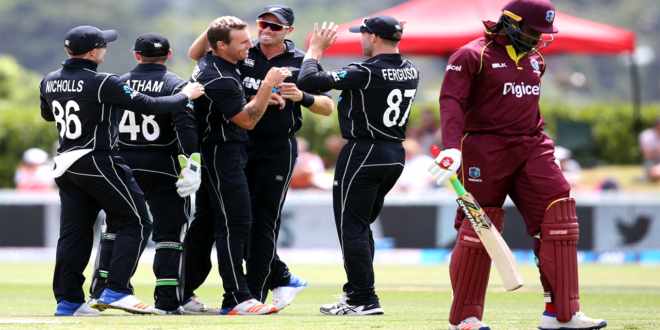 West Indies go down in opening ODI against New Zealand

The early bird often gets the worm, but there is an equally good chance of nocturnal birds catching it. There are also significantly different approaches to ODI cricket. New Zealand are a disciplined team, insistent on doing the basics right. West Indies rely on their strength: a batting approach that revolves around attempting to find the boundary more often than gaps through the field. The longer the duration of a game, the better the chances of discipline trumping aggression.

West Indies weren’t able to sustain their approach for long enough, but New Zealand did as they limited the visitors to 248 for 9, and then chased it down clinically in the first ODI in Whangarei. Doug Bracewell, on his return to international cricket after pleading guilty to a drink-driving offence, picked up 4 for 55 from eight overs, and legspinning ODI debutant Todd Astle finished with 3 for 33. New Zealand’s openers, George Worker and Colin Munro then blazed away with a 108-run stand off just 100 balls to effectively kill the game on a surface that got progressively better to bat on.

Chris Gayle and Evin Lewis began cautiously, playing out three successive maidens. The first five overs produced four runs. Both batsmen soon found their hitting rhythm, combining for five fours and a six in a 40-run opening stand. At no point did they consider singles as a scoring option. Bracewell then had Gayle caught behind off his first ball. A thick inside edge had Shai Hope two balls later.

West Indies enjoyed their best period of batting thereafter, as Shimron Hetmyer and Lewis picked their deliveries to score off. Unsurprisingly, both batsmen were in most control when they were attacking. Hetmyer, though, failed to pick a googly from Astle in the 24th over, chipping a catch to long-off, an indicator that Hetmyer hasn’t found his batting tempo just yet.

As has happened so often on their tour already, West Indies’ middle order was again done in by a combination of pace and the lack of it. Lockie Ferguson, generating 145-kmph speeds, had Jason Mohammed caught on the crease and chopping onto his stumps. Jason Holder was caught at gully, a one-handed stunner from Ross Taylor to his right, off a legcutter from Bracewell. West Indies had quickly slumped from 103 for 2 to 134 for 5.

After a 43-run partnership that stabilised West Indies, Lewis misread a googly, missing a sweep off a full delivery on 76. Umpire Shamshuddin, it seemed, misread the variation too, as replays showed the ball would have missed off stump. West Indies didn’t have a review left.

New Zealand’s top order, led by openers Worker and Munro, showed up West Indies’ woefully under-par total. West Indies’ seamers bowled two lengths: too short or too full, struggling to find the perfect length in between. Both batsmen laid into short and wide deliveries, scoring a combined 47 runs square on the off side.

West Indies, though, hit back quickly with wickets in consecutive overs. Munro lobbed a catch to short cover in the 17th over, beaten slightly for pace off the bowling of Williams. Worker then misread the trajectory of a dart from Ashley Nurse, missing a cut that was far too close to his body.

With no lateral movement on an even surface, conditions were perfect for batting. Kane Williamson and Ross Taylor looked largely unflustered in a 57-run partnership at 4.12 per over.

One of Williamson’s strengths is his ability to rotate strike through third man with an angled bat, but with the line close to off stump, that stroke becomes risky. He chopped one such delivery from Jason Holder onto his stumps on 38.

Taylor stayed circumspect through his innings, displaying a keenness to take New Zealand home. His unbeaten 76-ball 49 included just two fours, but like New Zealand’s way, it got the job done.

2017-12-20
Previous CSA WANTS JOB EQUITY FOR THE VULNERABLE IN SOCIETY
Next Governor General Out?