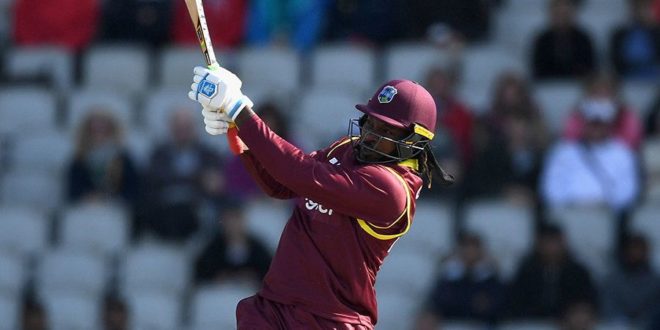 West Indies’ chances of finding a way past a New Zealand side on this tour have been as slim as England bowlers’ prospects of finding a way past the middle of Steven Smith’s bat across the Tasman Sea. After being outplayed and out-thought in the two-Test series, West Indies unravelled against New Zealand XI in the tour match on Saturday: from 180 for 1 they rapidly subsided to 288 all out. The bowlers then copped punishment from Test specialist Jeet Raval – who isn’t needed by Auckland in the ongoing Super Smash T20.

To compound their woes, they have lost Marlon Samuels (hand injury), Alzarri Joseph (back strain), and Sunil Ambris (fractured forearm). West Indies, however, will be enthused by the return of their captain Jason Holder, who had been suspended for the Hamilton Test because of an over-rate offence, and Chris Gayle, who reminded everyone that he is still the Universe Boss with a record-breaking 18 sixes during his 69-ball 146 not out in the Bangladesh Premier League final.

But can they alone turn around the fortunes of the ODI side? In addition to not qualifying for the Champions Trophy earlier this year, West Indies were swept 3-0 at home by England and later lost 4-0 in the return series with rain washing out one match. In between, they lost series to Pakistan and India – and nearly to Afghanistan at home. Limited-overs success in New Zealand could be a shot in the arm before the World Cup qualifiers in Zimbabwe next year.

New Zealand have no such troubles: they nearly stole a bilateral series win in India with their impeccable planning. And it has seeped into their series with the management resting senior players – captain Kane Williamson and bowling spearhead Tim Southee – for the second and third ODIs of the series ahead of the busy home season. Colin de Grandhomme has withdrawn himself from all three ODIs because of bereavement, but the hosts still have enough depth to keep West Indies down.

From pondering about becoming a T20 gun for hire, Colin Munro has fit into New Zealand’s top order in both ODIs and T20s. He isn’t just about brawn; he showed brain while negotiating the slower cutters in India. With the ball likely to come onto the bat nicely at Cobham Oval, Munro might not have to worry about the change-ups and revert to solely carting the ball.

Chris Gayle. Who else? He showed sparks of brilliance in England with 173 runs in four innings and then fired like only he can in the BPL eliminator and the title clash. West Indies will be hoping he can extend his hot streak in New Zealand.

A hamstring injury has ruled Martin Guptill out of the series, and the left-arm spin-bowling allrounder George Worker will open in his place. Doug Bracewell will replace de Grandhomme while legspinner Todd Astle will replace Mitchell Santner, who has been ruled out of the first ODI because of a shoulder niggle. New Zealand might have to choose between Adam Milne and Lockie Ferguson for the out-and-out fast bowler’s slot.

Kyle Hope, who had been dropped for the Test series, made his case for a spot in the ODI team by top-scoring with 94 in the tour match, although at the top of the order. He is likely to occupy a middle-order spot along with his younger brother Shai. On the bowling front, the visitors might have to pick between Nikita Miller, who hasn’t played ODIs since the 2015 World Cup, and Ashley Nurse.

“It [The pitch] has a bit of grass, should be a good batting track, it won’t change much during the game,” Holder said on the eve of the game. “The standard in world cricket now is 300-plus – we’ve got to be looking at that.”

“The challenge with someone like Chris [Gayle] is when he’s going he puts the bowler under a lot of pressure – and that’s his biggest asset, I suppose. Perhaps, in the past we’ve had some success, hopefully we can do that again. It’s making those adjustments when someone gets in and you have to go to Plan B, you have to then execute the plans as best you can.”
New Zealand captain Kane Williamson

“I think it started primarily from Brendon McCullum’s captaincy. He was very aggressive and it really filtered down into the group. Kane [Williamson] is probably a bit different in terms of his leadership but the New Zealand team is normally quite an aggressive team, especially upfront with both bat and ball.”
West Indies captain Jason Holder

GMT 1328 The New Zealand line-up erroneously included Martin Guptill, who is out injured. This has been corrected