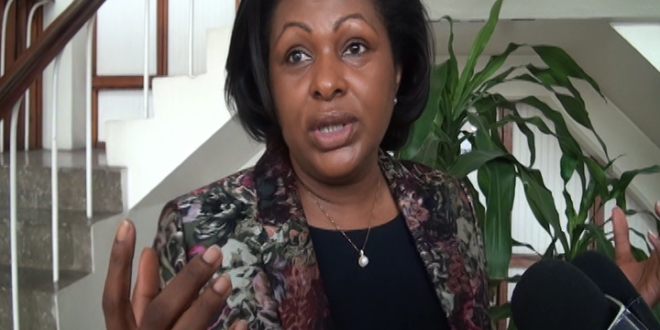 “We should not set children up for failure” – Sarah Flood-Beaubrun

Minister in the Office of the Prime Minister and well known religious conservative Sarah Flood-Beaubrun does not believe households run by same-sex couples are in her words, ‘ideal’ for children.

Flood-Beaubrun also the Member of Parliament for Castries Central expressed her disapproval to local reporters on the sidelines of a December 5th House Sitting. She responded to questions about her hard-line views on same-sex couples and the lesbian, gay, bisexual, transgender [LGBT] minority, which she recently espoused during the World Conference of Families meeting held in November.

The government Minister who has been tasked with the External Affairs portfolio leaned heavily on Article 16 of the Universal Declaration of Human Rights which states;

(1) Men and women of full age, without any limitation due to race, nationality, or religion, have the right to marry and to found a family. They are entitled to equal rights as to marriage, during marriage and at its dissolution.
(2) Marriage shall be entered into only with the free and full consent of the intending spouses.
(3) The family is the natural and fundamental group unit of society and is entitled to protection by society and the State.

The Minister also referenced what she described as ‘respected’ scientific studies she believes prove households led by heterosexual couples are best suited for raising children.

Flood-Beaubrun downplayed discrimination concerns however, reiterated her views on advocating for the ‘natural order’. According to the Minister, a home with a mother and father provides the healthiest environment for raising children as opposed to same sex parenting which she said can ‘set children up for failure’. [Watch video]

Sarah Flood-Beaubrun is the co-founder of the Caribbean Centre for Family and Human Rights (CARIFAM) and has reaffirmed the NGO’s staunch opposition to legislative reforms for the LGBT community in Saint Lucia.

CARIFAM established in 2012, describes itself as a ‘non-profit charitable organization dedicated to protecting the family, human rights and human dignity’. The rights of people who identify as LGBT continue to be under CARIFAM scrutiny.

Local LGBT organization United and Strong continues to push for the removal of buggery as a criminal offence on the statute books.