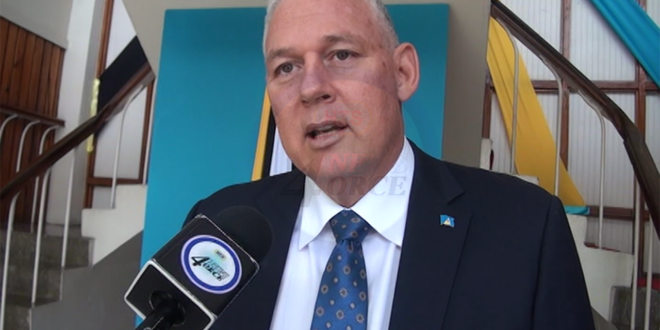 The parliamentary Opposition, Senators and Members of Parliament, were conspicuously absent during the maiden Throne Speech of newly installed Governor General Sir Emmanuel Neville Cenac at the March 20th 2018 joint session of Parliament.

Most Opposition MPs in the Lower House led by Philip J. Pierre and Upper House Senators led by Joachim Henry were in attendance for the respective meetings that signaled the commencement of the Third Session of the Eleventh Parliament. However, seating reserved for the Opposition in the packed Chamber remained empty for the remainder of the proceedings, especially during the throne speech.

Prime Minister and Leader of Government Business in the House of Assembly Allen Chastanet was not impressed with another apparent Opposition boycott. He claims that the Pierre J. Pierre led Opposition has “lost the plot” on their role.

There were hints of a possible no-show by the Opposition. Speaking ahead of the proceedings, Tuesday morning, Pierre again bemoaned the perceived lack of consultation on Constitutional appointments in the House.

Sir Neville notoriously ‘crossed the floor’ after the second 1987 General Election, which gave then Prime Minister Sir John Compton a more comfortable 10-7 margin in the House of Assembly.

The Opposition citing his perceived controversial political has characterized Sir Neville as “a man of no merit”.