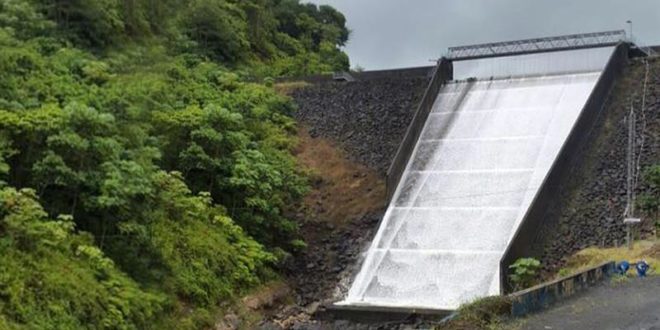 GIS- THE DAM’S CAPACITY OF 660 MILLION IMPERIAL GALLONS HAS BEEN REDUCED BY 50 PERCENT DUE TO THE BUILD-UP OF SEDIMENT.

The Government of Saint Lucia through the Water and Sewage Company (WASCO), on May 21, held the ground breaking ceremony to signal commencement of works on the first phase of the John Compton Dam Rehabilitation Project.

The desilting project will see the removal of approximately 1.5 million cubic meters of sediment from the reservoir.

Phase one of the project will see the construction of a sediment disposal area funded exclusively by WASCO from a drenching fee introduced in 2012. The fee was part of consumers’ bills, and has accumulated to approximately EC$25.95 million dollars.

The second phase of the project will include the installation of pipes and the removal of sediment. That phase will be financed through a loan secured from the Caribbean Development Bank. The overall cost of the project now stands at EC$54 million.

Upon completion of the project, residents in the north of the island will be guaranteed a consistent supply of portable water.