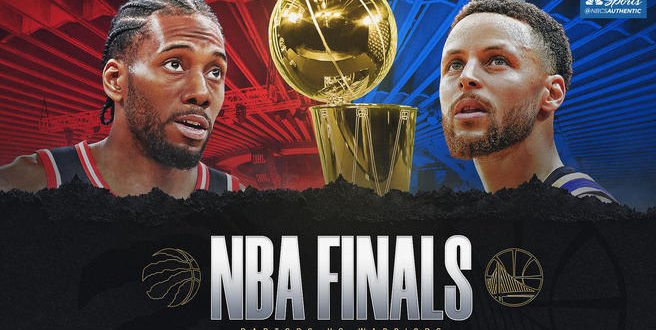 WARRIORS TO FACE RAPTORS IN NBA FINALS WITH GAME 1 THURSDAY

NBC Sports- The Warriors’ road to a third straight NBA championship will run through The Six.

Golden State will square off with Toronto in Game 1 of the NBA Finals on Thursday night at Scotiabank Arena, thanks to the Raptors’ 100-94 win over the Milwaukee Bucks in Saturday night’s Game 6 of the Eastern Conference finals.

The Raptors trailed two games to none in the best-of-seven series, but they advanced to the first Finals in franchise history after winning four consecutive games. Toronto trailed by as many as 15 points in the third quarter Saturday, but outscored Milwaukee 29-18 in the fourth.

The Warriors lost both regular-season matchups with the Raptors, and Toronto was without two-way superstar Kawhi Leonard in a 113-93 win over Golden State on Dec. 12. But the teams have not faced one another in over five months, and DeMarcus Cousins did not play in either of those games.

Golden State’s center could return in time for Game 1 of the Finals after injuring his quad in Game 2 of the Warriors’ NBA first-round playoff series with the Los Angeles Clippers. Kevin Durant, meanwhile, has not been cleared to resume on-court activities.

2019-05-27
Liz-Anne De Beauville
Previous SEAN JOSEPH IS SAINT LUCIA’S 17TH HOMICIDE; 3RD FOR THIS WEEK
Next ARE BARCELONA HEADING FOR SUMMER OF UPHEAVAL AFTER CUP DISAPPOINTMENTS?