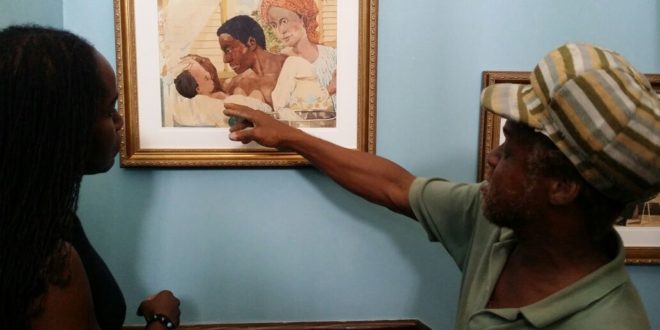 The Saint Lucia National Trust (SLNT) is pleased to be reopening Walcott House as part of Nobel Laureate Festival observances from January 15 to February 9, 2018 at No. 17 Chaussée Road, Castries.

Walcott Place is a collaborative initiative between the Government of Saint Lucia and the Saint Lucia National Trust, designed to celebrate the lives, works and achievements of the Walcott brothers, Roderick and the Honourable Derek Walcott, and to honour their artistic, literary and intellectual contributions to Saint Lucia, the Caribbean and the World.  A special feature of never before seen sketches and drawings by Sir Derek from the “Sancha Gaspard Walcott Collection” will be on display. These works have sat untouched for more than a decade and provide more insights into his dexterity in the medium of watercolor.

To add a new twist to the Walcott House exhibition new contemporary interpretations of Sir Derek by Mr. Cedric George and Mr. Niger Nestor will be on display. The exhibition will take place on week days between the hours of 10:00am to 4:00pm, and will include a tour of the Museum along with a question and answer segment for students about the life works of the Walcott brothers.

According to the Director of the SLNT, “We were saddened by the closure of Walcott House in June 2017 due to financial constraints but are pleased to reopen it albeit briefly in observance of Nobel Laureate Festival 2018. Libraries and museums make an important contribution to national pride and identity, and in this vein the Walcott House makes an important contribution to this aspect of our individual and collective development.”

We hope you too will be inspired by our two literary giants.