Home / News Updates / From Vieux-Fort to ‘pearl of the Caribbean’? 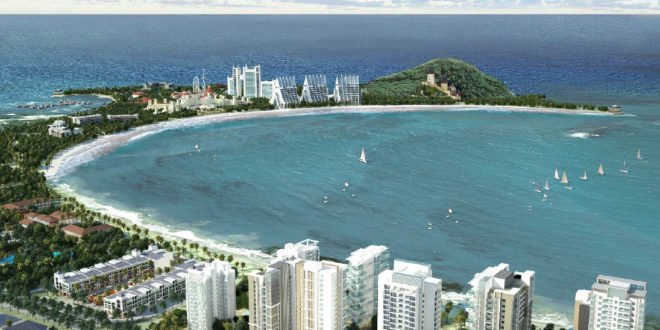 From Vieux-Fort to ‘pearl of the Caribbean’?

On May 17th, 2017 the Prime Minister Allen Chasatnet for the first time, publicly addressed concerns over the Desert Star Holdings [DSH] Ltd Agreement with southern residents since the Framework Agreement was signed in July 2016.

Prime Minister Chastanet encouraged Vieux-Fort and southern residents to embrace the DSH project reportedly estimated to be worth US$ 2.6bn. The plea comes roughly 10 months since the Prime Minister inked the Framework Agreement with DSH represented by Chairman Teo Ah Khing.

The DSH deal has garnered national scrutiny and continues to stoke public debate since documents purporting to be the signed Framework and Supplemental Agreement allegedly leaked on social media.

• The SLNT has objected to a proposed man-made causeway to the protected Maria Islands, which is home to rare flora and fauna species.

Other local civil society groups including, I Will Stand, Save Our Sandy Beach and, Vieux-Fort Coalition of Concerned Citizens for Change [VF4Cs] have condemned the DSH deal. The aggrieved groups have previously hosted demonstrations at the sites earmarked for DSH construction.

The government has held consultation in Vieux-Fort on DSH. Chief Investment authority Invest Saint Lucia [ISL], Commerce Minister Bradley Felix and senior staff of the Office of the Prime Minister [OPM] hosted a feisty town hall in Vieux-Fort to appease and inform residents on the expectations of the DSH deal.

Private sector lobby, the Saint Lucia Chamber of Commerce has also held DSH discussions in Vieux-Fort. ISL and the Chamber did little to quell the DSH tension in Vieux-Fort. DSH was promoted as the key agenda item ahead of the United Workers Party [UWP] first public rally since winning the last General Elections in Vieux-Fort town.

Prime Minister Chastanet refuted claims that the DSH deal will cause displacement and environmental damage. Instead, the Prime Minister expects the DSH investment to create employment and gentrify Vieux-Fort from a ‘ghetto’ to a ‘pearl of the Caribbean’ location.