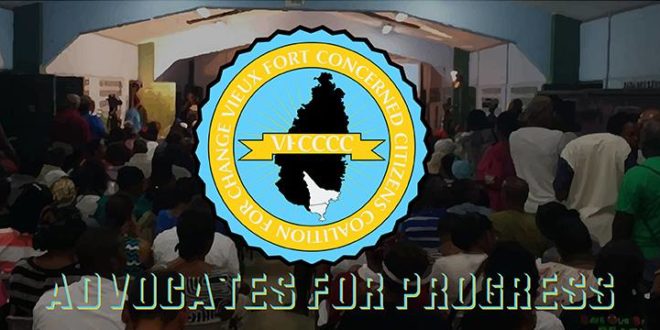 [Press Release] The recent announcement by the Prime Minister of what he refers to as the “master plan” for the development of Vieux-Fort is the new name for Teo Ah Khing’s Pearl of the Caribbean fantasy.

On more than one occasion before this announcement, Teo Ah Khing presented the PM with colourful renderings of his dream plan to excite citizens into thinking that there is a future of endless possibilities and opportunities being prepared for them in the Vieux-Fort area.

The PM continues to be impressed with these pie-in-the sky, hare-brained scheme of this cunning architect of Malaysian descent. The “master plan” includes a causeway to Maria Islands, construction of high-rise buildings on Sandy Beach and land reclamation of about 140 acres in the marine environment near the islands (to fulfill his father’s dream).

The PM should have acquainted himself with what exists in relation to the development of Vieux-Fort before making the nonsensical statement that such development was being approached in a “piecemeal manner”. He would have found out that there is an existing Landuse Plan and Master Plan for the development of the strategic lands in Vieux-Fort (close to 1200 acres) prepared by Invest St. Lucia in 2012.

These featured prominently in the Saint Lucia Investment Forum held in 2014 by Invest Saint Lucia Inc. which also arranged for conducted tours of specific areas earmarked for development. Surely, these actions form part of a holistic approach to the development of Vieux-Fort.

Furthermore what is more “piecemeal” than the current utterances coming from the PM in relation to the development of Vieux-Fort?

The PM’s “Vieux-Fort Master Plan” gives away over 1000 acres of prime investment and development lands for 99 years to the architect Teo Ah Khing, a foreign national with no track record in development. So if the PM is touting Teo Ah khing’s architectural brilliance as the only approach to the transformation of the south then we need to ask

(1) Where is the document that describes this “master plan”?

(2) Why has it not been presented to the St. Lucia Parliament and the people of St. Lucia for perusal, information, discussion and or debate?

(3) Who will finance the implementation of this “master plan” and

(4) Who will monitor the implementation, operations and results of this “master plan”?

After two years in office the PM should have known that a master plan serves to guide the overall character, physical form, growth, and development of a community or area. A good one must be fair, equitable and sustainable and able to balance competing interests and development needs against the need to conserve and protect the area’s environmental resources, heritage and patrimony, traditional ways of life and livelihoods. It must take into consideration the interests of current residents as well as those of future generations.

The VF4Cs has made several appeals for residents of Vieux-Fort and other key stakeholders to be informed about this DSH Project (and now the Master Plan for Vieux-Fort) and to have their concerns addressed. These concerns are many as the project will have huge, numerous and far-reaching disturbing implications for the survival of the town and district of Vieux-Fort. Overall, it will be detrimental to the physical, economic and social development of St. Lucia.

Furthermore, this DSH Project or “Vieux-For Master Plan” that the PM is so excited about has presented numerous problems to both Invest St. Lucia and the CIP Unit. Some principal ones are:

(1) It has been rejected about eight times by both state investment agencies since first presented in 2016;

(2) Teo Ah Khing is the sole director and shareholder of the Master Developer Company with no experience with the citizenship by investment programme;

(3) the DSH Project Proposal has a heavy reliance on CIP funding (i.e. 87.4%) and it would be challenging for the developer to raise the level of capital needed. Thus the probability of success is low;

(4) the Developer is requesting a minimum of 1843 CIP Units at US $300,000.00 per unit which represents a value of US $553M, but this shows there is a difference of US $256M between development cost and the value of the CIP Units being requested, and

(5) the developer wants 90% of the cost of the project to be collected before starting construction.

Additionally, in order to complete a true assessment of the project, Invest St. Lucia is asking the developer to provide details and financials of all the phases of the integrated development, including, the operational aspects. As the agency rightly pointed out, “A project of this magnitude must be assessed in totality to determine the viability of the businesses proposed on state owned assets and reasonable revenue to be forgone by the Government.”

So Mr. Prime Minister explain to the citizens of this country how will your “master plan for Vieux-Fort” be financed and who will be the major beneficiaries? This current DSH deal presented as your “master plan” for Vieux-Fort is horrendous, myopic, has little regard for the public good, one-sided, unjust, immoral, wrong, will subjugate the Town and District of Vieux-Fort to a new form of colonialism and create the conditions for environmental destruction and economic marginalization of livelihoods on a scale difficult to imagine.

The VF4Cs once again calls on the Prime Minister of St. Lucia to set a plan in motion to renegotiate the DSH Deal so as to bring significant economic and other benefits to the Vieux-Fort Area and the wider state of St. Lucia. Yes, a proper development plan is badly needed for Vieux-Fort, but the DSH Deal is not the answer.

As a political commentator said recently growth and development are essential but they must be achieved in a responsible manner, inclusive of an environmental plan, project management and leadership, a management plan, a national development plan, all in a transparent way. If allowed to go on as presently conceptualized, this DSH Deal will create nothing more but a Chinese dominated colony of alienated, dispossessed and voiceless people in the south of St. Lucia. Mwen fache ek mwen hont.