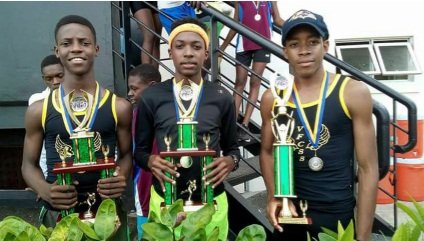 (PRESS RELEASE) – Athletes from the Vieux-Fort Comprehensive Secondary School gave a photo finish at the National Road Race which was held in Beausejour on Friday 01st December, 2017.

The three male athletes representing the school finished in grand style, coming in way ahead of the pack to snag the top three positions.

Mr. Antoine, a Physical Education teacher at the school, says he had predicted exactly that on the way to the race. He had expressed to the three young men that he was expecting nothing less than podium finishes. And so it was that athletes of Vieux-Fort Comprehensive Secondary School emerged champions of the day.

The school is especially proud of the great sportsmanship displayed by the three young men. The school is equally proud and thanks in a special way, all students who participated in the different sporting events this term including netball, football and basketball.