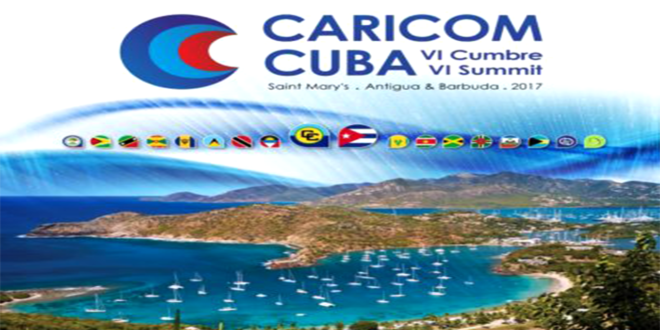 (PRESS RELEASE) – During the VI CARICOM Cuba Summit, which took place on December 8, 2017 in Antigua and Barbuda, a memorandum on multi-destination tourism was signed between the CARICOM member countries and Cuba to increase the exchange in this sector in order to favor regional economic growth.

A memorandum was also signed for emergency management and disaster risk reduction between the Caribbean Disaster Emergency Management Agency (CDEMA) and the Civil Defense of Cuba. Likewise, CARICOM and Cuba discussed cooperation in the areas of research and development, food security, the possibility of joint actions to strengthen national security, and the promotion of trade based on the agreement signed between CARICOM and Cuba in November 2017.

The importance of the Community of Latin American and Caribbean States (CELAC) as a forum for dialogue and as an international political actor was recognized.

It was ratified that CARICOM and Cuba will seek greater international support for the development of the Caribbean and that the joint effort to rebuild the countries damaged by the hurricanes will continue.

After the Summit, on December 9, 2017 a session of the OECS Assembly was held in Antigua in which friendship and fraternity with Cuba was demonstrated.

Cuba considers it a duty to continue sharing its modest achievements with the Caribbean. 5,432 Caribbean students have graduated in Cuba and 723 are studying at this time. 1,762 Cubans now work in the Caribbean as part of international cooperation programs, most of them in the health sector.

It was agreed that the 7th CARICOM Cuba Summit will be held in Havana on December 8, 2020.