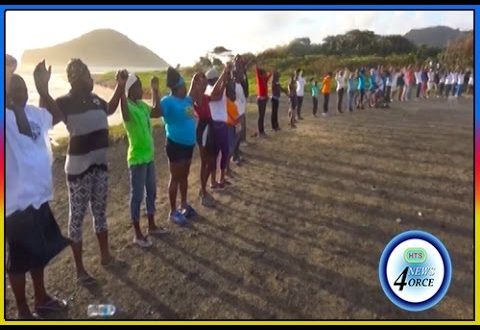 VF4Cs in “disbelief” over state of public healthcare

[Press Release] The Vieux- Fort Concerned Citizens Coalition for Change (VF4Cs) is in shock and disbelief about what it has read or heard on the state of public healthcare in St. Lucia.

The healthcare situation is just not bad or in decline for according to the last press statement published by the St. Lucia Medical and Dental Association (SLMDA) and assessments from individual doctors, it has reached crisis state. One understands from the current assessments that doctors and nurses and hospital staffs have to deliver healthcare services in deplorable conditions “leading to unwarranted suffering and deaths”. The healthcare providers are also faced with “stresses of immense proportions” partly because “staff morale is already at an all-time low and their frustrations are palpable and wearing thin”.

Had these assessments come from rabble-rousers, rumour-mongers or well-known political party hacks one could have questioned their veracity or authenticity and probably dismiss them as political mischief. But when it comes from the principal stakeholders in the delivery of the nation’s healthcare services, the government and citizens of St. Lucia must stop and listen.

Most, if not all, doctors graduating from medical schools take the Hippocratic Oath (or some modern version of it) by which they swear to uphold ideal conduct and specific ethical standards to treat the sick to the best of their ability, preserve patient privacy and teach the skills of medicine to the next generation of physicians. Doctors do not simply let suffering people die. They do all that is possible to reduce or eliminate suffering and save lives. When a patient under the care of a doctor dies, there is an expression of apology, personal grief and empathy.

But when doctors openly admit to a nation that people are suffering with increasing numbers of unwarranted deaths because of poor quality healthcare delivery, then this must be seen as an indictment of the current government towards the citizens of this country.

The Chastanet-led Administration must take full responsibility for the present and deplorable state of healthcare in our country. Its indecision, contradictory statements, compulsive lying, deliberate misinformation and distractions, the irresistible inclination to put the special interests of friends, family and foreigners before the national interest, refusal to consult with key healthcare stakeholders, lack of a coherent and visionary policy and plan for healthcare and ineptitude in dealing with the emerging issues are some of the factors which we see as contributing to the crisis.

Instead of addressing these matters in an urgent, serious, substantive and all-inclusive manner, the current Administration is fixated upon privatizing key aspects of public healthcare infrastructure and services such as the St. Jude Hospital and the Owen King European Union Hospital (OKEU), to foreign interests against the mounting chorus of alarm, disbelief and disapproval by qualified, experienced and professional health providers, civil/construction engineers and other technical professionals and the majority of citizens of this country; it is attacking, disrespecting and denigrating capable and well-endowed nationals who can help fix the healthcare problem; it refers to the comments of patriotic St. Lucians as healthcare “terrorism”; it resorts to asking irrelevant and childish questions such as “Why now”? or “Where were you two years ago?”

For the sake of repeating the VF4Cs holds the strong view, like the SMDA, that access to affordable, equitable and quality healthcare is a basic human right and that the delivery of such healthcare is a fundamental responsibility of every government. The VF4Cs also strongly believes that St. Lucia’s healthcare and other technical professionals have abundant knowledge, experience, competence and capacity to remedy the healthcare situation. The powers that be must embrace and engage them and other citizens of the land to help find solutions to difficult issues that confront the nation. As an independent nation we cannot continue to refer our problems to foreigners and pay them handsomely so as to provide us with ready-made, and sometimes simple or obvious solutions.

As the SLMDA said “This healthcare crisis is as much a national imperative as it is about humanitarian issues and human dignity”. It is because of this strong and powerful message that the VF4Cs is inviting all St. Lucians, from every walk of life, to a town hall meeting on Friday, May 11, 2018 at the Beanefield Secondary form 7:00 pm. to discuss this healthcare crisis and how we can collectively fix it quickly and put an end to the complicity with, accommodation of and excuse for this national shame.