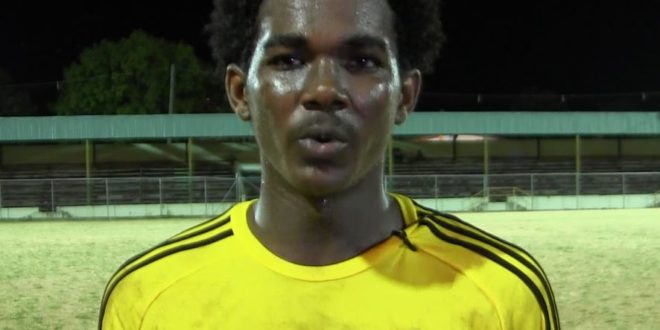 Game 5
In the first encounter of the Match Day 3, VSADC dominated possession and the pace at the start of the match. FLOW Lancers looked unlikely to get a good result on their performance before half time.Raheem Peters scored in the 26th minute for VSADC. VSADC kept control of the fixture right up to the 82ndminute. In about a minute of madness for Jervis Valcin of VSADC, he picked up two yellow cards, the second of which was for handling the ball in his penalty area. Junior Hunter made good with the ensuing penalty to bring FLOW Lancers level at the 83rdminute.Momentum quickly switched in FLOW Lancers’ favour. By the 89th minute, Shem Ermay had picked up the ball from the midfield and outpaced an exposed VSADC defense to put FLOW Lancers in front.FLOW Lancers advance (2-1) to the next round of the MPR Turbo King competition.

Game 6
The second match of the day was an exciting combat between the two young squads of Flames United and Valley Soccer. Both clubs combatted evenly in the midfield but Valley Soccer always looked more threatening on the attack. Chasley Bodley put Valley Soccer ahead in the 12th minute. Valley Soccer made better use of the flanks and width of the field throughout the matchup. Dilan Lucien increased Valley Soccer’s lead to 2 in the 39th minute as they looked likely to score a few more. Flames United improved their defensive posture in the second half.Valley Soccer advance (2-0) to the next round of the MPR Turbo King competition.