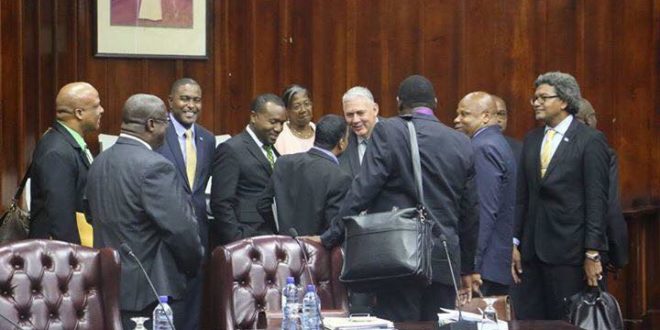 [Press Release] The United Workers Party is supports fully the 2018 / 2019 budget presented yesterday by Prime Minister Allen Chastanet at the House of Parliament.

Of particular note is the unambiguous announcement that there will be no new taxes during this budget year. Since coming into office this UWP administration has shown it unrelenting commitment to implementing policies which will improve the lives of each and every Saint Lucian.

We are indeed very pleased by the Prime Minister’s identification of four major areas whose neglect have been the limiting factors to sustainable growth in Saint Lucia. They have all been addressed by the budget and will be the focus of this government for the remaining three budget cycles; these areas are:

Further, a clear sign of the government’s seriousness came when Prime Minister Allen Chastanet emphasized his government’s commitment to accountability and good governance, and the launch of investigations into Walid Juffali, Jack Grynberg, Robert Lindquist, St. Jude Hospital and the infamous “Minister’s Account” are a welcome sign of this government’s pledge to the people of Saint Lucia.

With the falling unemployment levels, increased economic activity and investments, moves to enhance the police, fire, and emergency services, increased tourism figures, we are convinced that this government is on the right path.

The United Workers Party remains optimistic by the direction of this government and their expressed plans in the 2018/2019 budget, and encourages all Saint Lucians to support the good governance of this administration.