Home / Sports / Usain Bolt collapses in final race; team doctor says it was a cramp, but he’ll have MRI Sunday 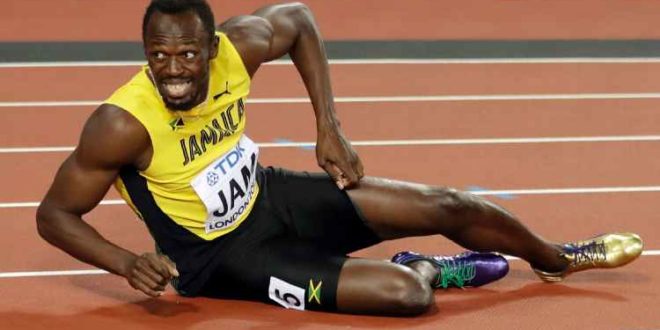 Usain Bolt collapses in final race; team doctor says it was a cramp, but he’ll have MRI Sunday

LONDON — Usain Bolt was ramping into warp speed when suddenly, stunningly, the sprint turned into a somersault.

Fifteen steps into the final homestretch of his final race, something gave in Bolt’s left hamstring. The World’s Fastest Man skittered to a stop, hopping, skipping, jumping and finally dropping to the ground and tumbling forward before coming to a rest.

While the winning team from Britain crossed the finish line, Bolt was writhing on the track, where he wound up chest down with his face pressed into Lane 5. He was certainly every bit as stunned as any of the 60,000-plus who packed the stadium Saturday or the millions watching one of the world’s most entertaining showmen make his final curtain call in the 4×100-meter relay at world championships.

There was no celebration — no gold, no silver, not even a consolation bronze, which Bolt received a week earlier in his final 100-meter race.

Jamaica closed the night with “DNF” by its name: Did Not Finish. Bolt was helped into a wheelchair but eventually got to his feet and, assisted by his teammates, limped gingerly across the finish line. He gave a few waves to the crowd, then left for the trainer’s room and, with that, presumably left track and field forever.

The Jamaica Gleaner reported that Bolt would have an MRI on his hamstring on Sunday to determine the extent of the damage.

“Injuries are part of our sport, and always, of course, it’s sad to see,” said Wallace Spearmon, the American sprinter who has been close with Bolt for years and was on hand helping the U.S. team. “So, yeah, it’s tragic.”

The Jamaican team doctor, Kevin Jones, diagnosed the injury that brought a strange end to Bolt’s career as, simply, a cramp in the champion’s left hamstring.

“But a lot of pain is from disappointment from losing the race,” Jones said. “The last three weeks have been hard for him, you know. We hope for the best for him.”

Watching track’s No. 1 sprinter and celebrity dropping to the ground was nothing short of jaw-dropping — so much so that the fact that Britain won the race, outrunning a United States team that, somewhat amazingly, didn’t drop the baton, almost seemed like an afterthought.

Nethaneel Mitchell-Blake held off U.S. anchorman Christian Coleman down the stretch, and the Brits won their first world title in the 4×100 in 37.47 seconds.

When Bolt took the baton from Yohan Blake for his final homestretch, he was in third place, but that was no cause for concern. In virtually each of the seven relay golds he has won at the Olympics and world championships, Bolt has reeled in the competition down the stretch and won going away, much the same as all his 100 victories have played out.

Five years and one day earlier, on the very same track, Bolt helped Jamaica set the world record. That run of 36.84 seconds earned Bolt the sixth of nine Olympic victories.

But last week in the 100, Bolt’s extra gear was not enough to catch Coleman, who finished second, or to hold off Justin Gatlin, the oft-booed American who came from behind to finish first.

Could he have caught his relay competition in this one? Nobody will ever know. Bolt was gaining no ground at the 30-meter mark, which is when he felt the pain in his leg and went tumbling.

Afterward, there was plenty of second-guessing to be done. Most of it came at the expense of the IAAF, which made the sprinters wait about 40 minutes from the time they were summoned from the warm-up room to the time the starting gun went off.

Said Gatlin, who remains insistent that Bolt will be back someday: “We lost all of our heat, all of our sweat, and we went out there cold.”