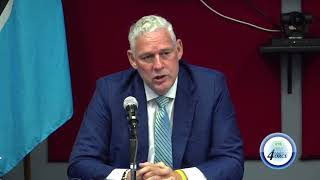 The U.S government has relaxed some of the leahy law sanctions on the royal Saint Lucia police force. The big announcement was made on Friday at a joint US/Saint Lucia security briefing with prime minister Allen Chastanet and the us ambassador to Barbados and the eastern Caribbean in attendance. The us withdrew security assistance and defence aid from the police force, citing the unresolved allegations of 12 extra-judicial killings by an adhoc task-force during a crackdown on a violent crime wave in 2010/2011. News of the easing of sanctions means that some units of the police force, namely immigration and marine unit, are once again eligible for us support and training.