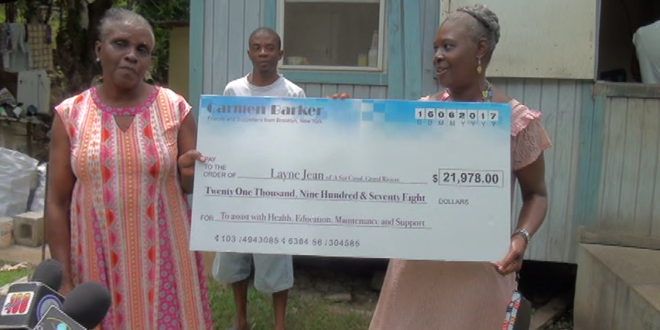 Carmen Barker, a Saint Lucian national based in New York, U.S.A has come to the aid of tumor sufferer 22-year-old Layne Jean. Jean, an Assou Canal Grand Riviere resident has neurofibromatosis – a genetic disorder of the nervous system that causes enlargement and deformation of bones and curvature of the spine (scoliosis). Occasionally, tumors may develop in the brain, on cranial nerves, or on the spinal cord.

Carmen Barker responded to the call to action for Layne Jean who is need of potentially lifesaving medical surgery currently not available in Saint Lucia. On June 16th Barker donated more than EC $20,000 to Layne Jean for medical expenses. [Watch video.]

Carmen Barker explained the financial donation to Jean was made possible with help from the Saint Lucian diaspora in the U.S and Canada along with U.S. citizens.

Andrea Jean has nine children including Layne. Andrea accepted the cheque on her son’s behalf.

The disorder was too much for Layne Jean and, forced his parents to take him out of school at 11 years old. Layne hasn’t had regular schooling since and has remained bed ridden from a previous surgery.

The Jean family is hoping to raise enough money for surgery in the U.S.