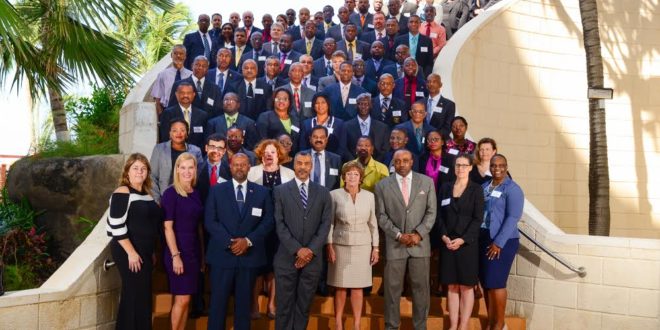 Participants of the U.S. Customs and Border Protection professional exchange pose for a group photo with Ambassador Taglialatela.

The professional exchange opened with keynote remarks from the United States Ambassador to Barbados, the Eastern Caribbean and the OECS Linda Taglialatela, and Rayburn Blackmoore, Minister of Justice, Immigration and National Security for Dominica and Chair of the Council for National Security and Law Enforcement within CARICOM.

The event also included an historic signing ceremony in which the United States and Turks and Caicos Islands pledged to work together, in cooperation with CARICOM APIS partners, to mitigate transnational crime and counter terrorist threats through the CARICOM APIS program.  Notably, Turks and Caicos is the first CARICOM associate member to join this important program.

“For the region’s borders to be secure, we must not only work within our sovereign states to identify and implement action,” said Ambassador Taglialatela.  “We must also seek input from Caribbean and U.S. government agencies, and our partner nations around the globe.  That is how we effectively secure our communities and protect our citizens — and our families.”