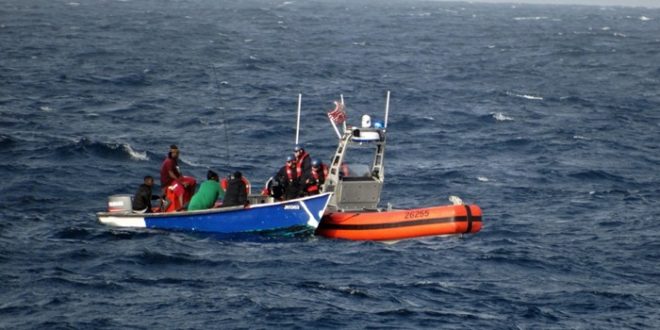 The rescued men reportedly departed Martinique at approximately 3 a.m. Monday and were returning to St. Lucia, when their boat ran out of gas and engine oil shortly after their departure.

The Donald Horsley, while on a routine patrol in Caribbean international waters, came across the blue and white-hulled boat at approximately 4 p.m. Monday, as the disabled vessel was drifting farther away from shore.

The rescued men communicated to the Donald Horsley that they had been adrift without food and water for over 13 hours, and that they had no radio equipment to communicate a distress and call for help.

Coast Guard watchstanders in Sector San Juan contacted the Fort de France Maritime Co-ordination Center in Martinique to report the situation, and were informed there was an ongoing search for the men, who had been reported overdue.

The crew of the Donald Horsley embarked the six men, who accepted to receive Coast Guard assistance, and later transferred them to a French Coast Guard patrol boat off Martinique.

“This case demonstrates the risks of the sea and how the U.S. Coast Guard provides assistance to mariners all over the world, said Lt. Colleen Denny, U.S. Coast Guard Donald Horsley commanding officer. “Thanks to the sharp search and rescue training and watchstanding coordination between the U.S. Coast Guard and our French partners, we found the “One Time” and saved six lives before night fall.”

– Boaters are reminded to equip their vessels with safety equipment, be mindful of state boating laws, and be courteous to fellow boaters while operating on the water.

– There should be a personal flotation device on the vessel for each person, sized accordingly.

– Boaters should have flares and are encouraged to have an Emergency Position Indicating Radio Beacon (EPIRB) with 406 MHz capabilities to enable a faster response by the Coast Guard in the event of an emergency.

– Boaters should have an operational marine VHF radio on their boat in order to contact the Coast Guard on channel 16, in the event an emergency.

-The Coast Guard strongly recommends that all boaters file a float plan with a friend or family member on land, with an approximate time of return and location to which you will be heading. It is also recommended that you regularly check in with those who are aware of your plan, especially if your plan should change.