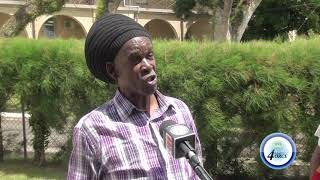 Two prominent members of the Rastafarian faith who were at odds on a number of issues of public concern say there is no bad blood. Peter “Ras Ipa” Isaac and Aaron Alexander were split on the recent controversy surrounding the SDA church confrontation, involving Castries south east hopeful Joachim henry. Amid a recent lack of civility in public discourse, the two men are making it clear that disagreements need not be disagreeable.