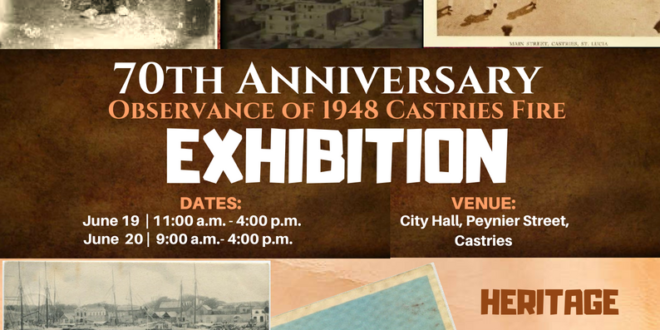 (Press Release) On June 19, 1948 seventy years ago 75% of the town of Castries was destroyed by fire and two thousand (2000) persons were left homeless. Fortuitously there was no loss of life, however, it was catastrophic enough that it tested the survival and the daily livelihood of residents. According to Saint Lucia National Trust’s (SLNT) Programme Officer for Built Heritage, Ms. Germaine Joseph, “The fire sent a ripple effect throughout the Caribbean and Europe. In a House of Commons sitting, Mr. Rees Williams commented that the loss was provisionally estimated at a little under £2,000,000 and that a contribution from His Majesty’s Government was under consideration. It is information of this nature that we would like to highlight during the 70th Anniversary Observance of the 1948 Castries fire.”

To this end, the SLNT is partnering with the Castries City Constituency Council, the Cultural Development Foundation, the Department of Infrastructure, Ports and Energy, Media Zone and Choice TV to stage the two day exhibition.

The public is encouraged to view the exhibition which will be held at City Hall, Peynier Street, Castries on Tuesday, June 19th from 11 a.m. to 4 p.m. and on Wednesday, June 20th from 9:00 a.m. to 4 p.m. Eye witnesses and survivors will be on hand to relay their accounts at the event and rare footage and audio visual installations of town of Castries between 1941- 1966 will be shown.

The Trust is also calling on the public to share any information on the fire which changed the urban landscape of Castries.