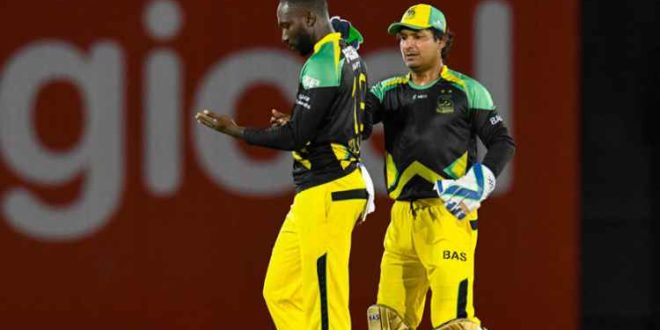 Trinbago Knight Riders made to pay for 38 for 8 collapse

Jamaica Tallawahs consigned hosts Trinbago Knight Riders to their first loss in CPL 2017 with a four-wicket win at Queen’s Park Oval. Knight Riders stormed out of the gates courtesy blistering cameos from Sunil Narine, Brendon McCullum and Colin Munro to reach 101 for 2 in eight overs, but could only manage 147 from there. Tallawahs rode a strong start from Lendl Simmons before Kumar Sangakkara’s steady 47 overcome a late wobble. Victory was achieved with four balls to spare.

Kesrick Williams‘ variations denied Knight Riders a turbocharge in the second half of their innings. Williams came into bowl in the third over. He cramped Brendon McCullum for room with his first legal delivery. He then followed that up with a wide slower ball that resulted in McCullum lobbing a gentle catch to mid-off.

Off the first ball of his next over, he had Narine miscuing one to midwicket. Three deliveries later, Williams nearly had a hat-trick of slower-ball wickets when Munro, on 11, dragged one off his legs to Jonathan Foo at backward square leg. The opportunity was fluffed. He came back at the death to pick up a third wicket – with another slower ball – as Javon Searles top-edged a slog to Imad Wsim at cover. His figures of 3 for 26 also earned him the Man of the Match award.

With Knight Riders losing momentum at 124 for 5 in 14 overs, Dwayne Bravo, the captain, needed someone to stick around. Shadab Khan, who showed his capability in the previous game – he made an unbeaten 30 in a tense chase – started with a six, but was consumed by a rush of blood when an ungainly heave resulted in his dismissal.

Tallawahs opted for the pace of debutant Odean Smith, instead OF Garey Mathurin. He should’ve had a wicket off his second ball, but for a missed opportunity by Kumar Sangakkara that gave Darren Bravo a reprieve on 19. Sangakkara muffed another chance off Smith in the 11th over when Denesh Ramdin gloved a pull down the leg side.

Persistence paid off, though, as Smith eventually nabbed Ramdin when he miscued a flick to Shakib Al Hasan at midwicket. Smith’s return at the death was impressive too. He rattled the stumps twice with full and straight deliveries to knock over the tail, denying desperately needed lower order runs to finish with 3 for 20.

Sunil Narine took two wickets, but a third, negated by a no-ball, drew greater attention. Sangakkara was on 21, with Tallawahs racing to 44 without loss in five overs, when he slogged one against the turn. Ramdin ran behind the skier and completed a tough catch at square leg. The joy subsided as Narine had overstepped. Simmons punished the free hit to raise the half-century in just 4.3 overs.

After Shadab had Lendl Simmons bowled off his pads for a 17-ball 38 in the sixth over, Narine removed Andre McCarthy and Rovman Powell to cause a flutter in the Tallawahs camp. But Simmons’ early charge allowed Sangakkara to drop anchor at the other end.

Given a second chance off the Narine no ball, Sangakkara played risk-free cricket. The equation was down to a run a ball by the time Sangakkara was dismissed by Dwayne Bravo in the 17th over. Foo then arrived and clipped 19 off 11 to help knock off the rest of the runs required.