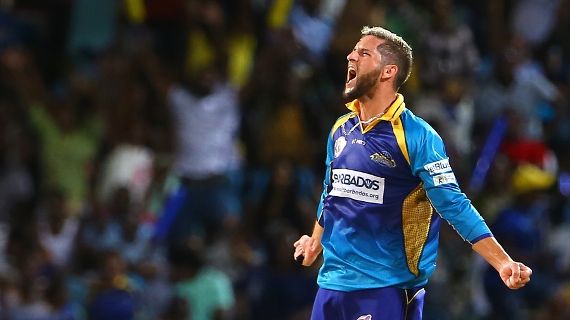 Tridents defend 136 but near elimination

Wayne Parnell‘s terrific display with bat and ball hauled Barbados Tridents to a 16-run win over table-toppers Trinbago Knight Riders at Kensington Oval. However, the narrow margin of victory still left Tridents on the brink of elimination. They are placed fifth, behind Guyana Amazon Warriors, with net run rate of -0.405, and face the improbable task of having to win their final league match by 220 runs to qualify for the play-offs.

Parnell’s unbeaten 44 at No. 9 rescued Tridents from 62 for 7 in the 10th over. He followed up his highest T20 score with figures of 3 for 31, and sent Brendon McCullum to the hospital with a blow to his left arm to wreck the Knight Riders chase. McCullum later confirmed that he won’t be taking any further part in the tournament, tweeting “@CPL over for this year unfort. Been a ride with @TKRiders brothers! Many thanks to all for your support! Luck team!”

Dwayne Smith, Tridents’ centurion in their previous match, fended an edge off Anderson Phillip to Denesh Ramdin second ball after they were sent in to bat.

Kane Williamson’s forgettable debut season continued with him caught behind for 6. The New Zealand captain has now failed to reach double-figures in more than half his innings this CPL.

Nurse ratchets up the pressure

Offspinner Ashley Nurse had gone wicketless in his first two matches after coming on as a mid-season addition to the Knight Riders squad. He was still named in the West Indies T20I squad to face England later in the month, and celebrated his recall with a wicket off his first ball, suckering Nicholas Pooran into an ill-advised slog to long-off. Two more wickets from Shadab Khan, along with a pair of run-outs, left the Tridents looking grim at 62 for 7 in the 10th over.

Tridents were in danger of being bowled out for double-digits for the second time in three matches when Parnell entered. It wasn’t the most glamorous knock, with several miscues falling in no man’s land, but he showed grit that the recognised batsmen before him lacked, and ensured his team had something to bowl at.

Just as vital was his new-ball spell that decimated the Knight Riders top-order. Parnell claimed Sunil Narine in the second over before Colin Munro slogged a catch to deep square leg. He then pinged McCullum on the elbow, forcing him to retire hurt and effectively left Knight Riders 41 for 3. Two balls later, Ravi Rampaul had Darren Bravo fending a short ball to backward point.

Not for the first time this season, Pollard produced a disciplined and inspired display with the ball, building on Parnell’s early spell to keep Knight Riders in check. He had Ramdin caught behind in the 10th over and Shadab followed suit as the score flagged to 67 for 5.

There was a brief swing in momentum when Parnell, returning in the 17th over, was smacked for 19 off five balls by Javon Searles. Knight Riders now needed a far more manageable 31 off 21 balls.

But Parnell hit back, bowling Nurse to wrap up his spell, and the match ended with Searles splicing a slog to short third man and McCullum unable to resume batting.