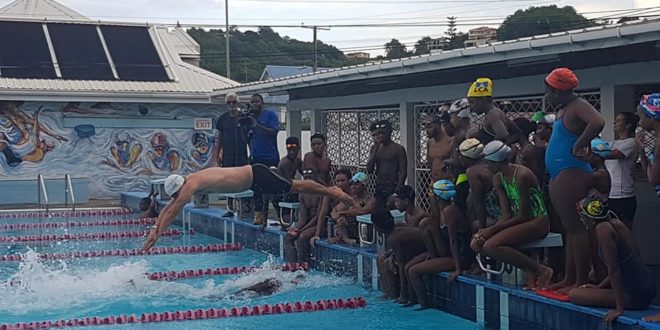 The OECS Swim Championship Days Away

OECS Swim Championship is on this Weekend!

The OECS Swim Team are all ready to host the 27th Annual OECS Swim Championship this weekend November 10th to 12th at the Rodney Heights Aquatic Center.

With 34 selected swimmers and 5 reserves the team has been preparing feverously on being all set to compete at its’ highest level.

Though this year some of its top swimmers will be absent due to academic commitments overseas, the team will be represented by a competent squad.

As part of the teams preparation, Sunday November 5th the team was graced with the presence of Keri-ann Payne a South African Born British swimmer, specializing in marathon open water swimming and long distance freestyle in the pool. She is a two time 10 kilometer open water champion and an Olympic silver medalist. Keri-Ann with her spouse David Carry who has also represented Great Britain in the Olympics and Fina World Championship joined Team SLU during its final team training session. They both shared tips on strokes and turns and advised the swimmers on positive attitudes during competition.

With the arrival of teams from Grenada, St. Vincent and Antigua this Thursday, President Eddie Hazel notes his confidence in the team bringing the trophy home for the 14th time over 27 years. He invites St. Lucians to come out and support the team at the Rodney Heights Aquatic Center this weekend and be exposed to the sport of swimming.