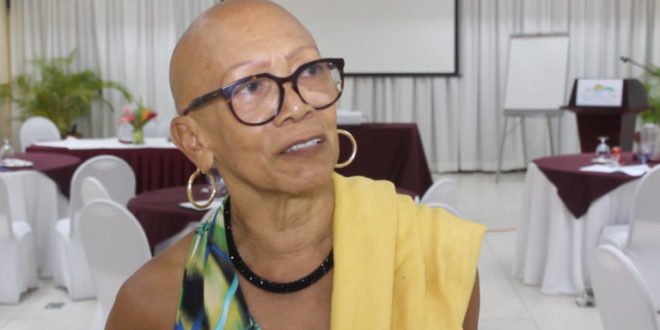 [Press Release] The OECS HIV/TB Elimination Project has touted many successes among most at risk populations, including men who have sex with men and sex workers.

Despite the successes many challenges and gaps have been identified. With funding, under the Global Fund, ending in 2019, stakeholders met at the Bay Gardens Hotel to discuss a possible continuation of this grant for another 3 years.

OECS countries are currently benefiting under the HIV/TB Elimination Project which focuses on access to care for vulnerable populations. With grant funding coming to an end in 2019, Didier said, the RCM has been invited by the Global Fund to prepare another 3 year grant spanning 2019 – 2022 to facilitate the continuation of services under this current grant.

“For us to do that we have to have country consultation with a broad cross section of persons so that they can give us feedback on the current grant and make recommendations for the programme going forward.”

Project Coordinator for the OECS, HIV/TB Elimination Grant, Dr. Cleophas D’Auvergne touted the many successes of the programme thus far. Included among these are workshops on combination prevention, a minimum package of services for sexual and reproductive health, human rights and legal literacy training, the sustained procurement of ARVs, condoms and lubricants for key populations and the production of educational manuals. HIV and Syphilis train the trainer workshops are also among the achievements highlighted for greater penetration of key populations.

He said clinical guidelines for HIV/TB and STIs have also been developed and updated.

“With regards to surveillance we’ve had a major success in terms of conducting the population size estimate studies we’ve been trying to do for a number of years now. At least 10 years and we’re finally able to have this completed.

We’re now in the data analysis and validation phase, as well as we’ve developed our HIV Clinical Management Module which will be used to actually strengthen the validation process for mother to child transmission of HIV and strengthen TB elimination in the future.”

Despite all the successes, Dr. D’Auvergne referenced the many challenges still facing key populations in the OECS.

“We still have challenges for HIV in terms of data collection for key populations, especially men who have sex with men with regards to HIV testing and outreach for them as well. We still have problems in terms of adherence and follow up as well. Programme integration and coordination between HIV and TB programmes. And for TB, it’s scaling up TB case detection in high risk populations especially migrant populations, the homeless substance abusers as well. So it’s really a constant process. We’re trying to ascertain the gaps we see now in the current grant so that we can use those gaps and actually try to incorporate synergies towards facilitating an improved continuation of the grant in the future for 2019 to 2022. ”