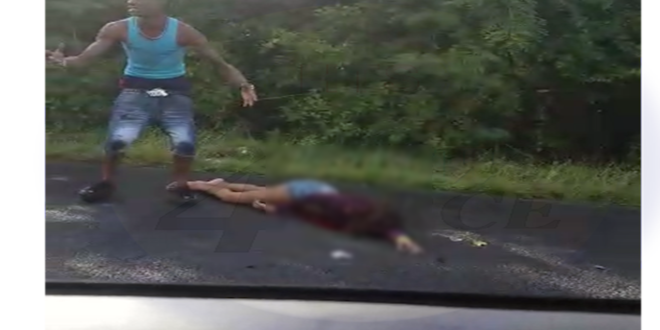 An inconsolable father anguishes over the body of his 18 year old daughter after the two were involved in a horrific auto crash along the Bean Field High Road in Vieux-Fort.

18 year old Rena Eugene reportedly died at the scene of a car crash that occurred along the Bean Field High Road near the George Odlum stadium sometime after 8 am 8 July.

The teen was a passenger in the motor vehicle [Reg. #PG 7090] which was being driven by her father when tragedy struck. Eugene was ejected from the car as it careened off road and continued to spiral before coming to a halt.

Cell phone video has emerged of the moments after the fatal crash which shows an inconsolable father wailing over the lifeless body of his daughter.

Police have launched an investigation.