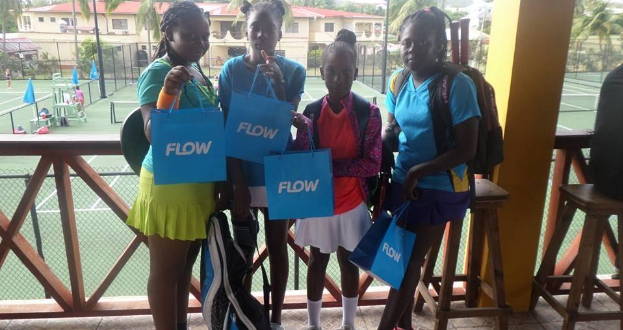 [Press Release] A group of athletes all females left for Antigua on Friday 4th May to participate in the “6th Annual Caribbean 12 & Under Junior Invitational Tennis Tournament” at the National Tennis Centre in Campsite, St. Johns.

The event impressively staged by the Antigua & Barbuda Tennis Association is sanctioned by the regional body “COTECC” where all countries come in to compete. There was a total of nineteen girls and eighteen boys in the tournament.

The team overall performed to their best and had decent results at the end of the tournament. Alysa Elliott placed 7th overall in the girls’ category. Alysa’s proper consideration for fairness, ethics, respect and her good sense of fellowship with her team mates and opponents made her the recipient of the Female Sportsmanship Award.

Iyana Paul another well rounded athlete played for 9th-12th place where she won her way through placing 9th overall. She partnered with Elliott in the doubles where they made it to the semifinal round of competition.

Mahkya Suffren and Latoya Murray both development players played their best at the tournament and we expect improved performance from them next time. They partnered in the doubles where they were defeated by the BVI team in a tough match. The team was quite content with their performance.