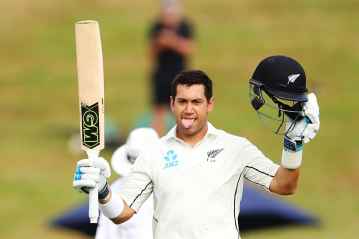 Ross Taylor acknowledges the cheer for his 17th Test century

New Zealand’s stranglehold on the Hamilton Test grew tighter on day three, as they piled on the runs to set West Indies 444 to chase, and claimed two wickets before stumps to begin the victory push.

Ross Taylor‘s 107 not out was instrumental to strengthening New Zealand’s position – the hundred taking him equal with Kane Williamson and Martin Crowe, who hold the New Zealand record, with 17 Test centuries. Williamson himself struck a lively fifty to steady the innings after West Indies had struck early blows, and Trent Boult was impressive again with the ball, taking wickets off successive deliveries in the morning, before making the first incision of the fourth innings as the day waned.

It was not as if West Indies were substantially outperformed on the day – just that they had ceded so much ground already that they required a near-miraculous effort to reimpose themselves on the match. Their quicks were good in patches – Miguel Cummins and Shannon Gabriel running hot at various points through the day. In one especially hostile spell, Cummins bowled Williamson with a searing yorker from outside the off stump, had Henry Nicholls nicking off to a well-directed short ball, and would also have had the wicket of Mitchell Santner had wicketkeeper Shane Dowrich managed to hold a difficult overhead chance off Santner’s top edge.

Gabriel, meanwhile, prospered with fast length balls aimed at the stumps. He claimed two wickets, one of which was an lbw of Colin de Grandhomme – a decision that was overturned in New Zealand’s favour only after a confused third-umpire’s review.

Taylor’s, meanwhile, was an innings of moderation. Sixty balls he took to hit his first boundary, having kept out some excellent deliveries from Cummins and Gabriel in that time. At no stage during his knock was he hurried; he was content usually to push the ball into gaps, keeping that brutal cut and those bludgeoned drives in check. Of his first fifty runs, 38 came from singles and twos. The only bowler who troubled him consistently was Gabriel, who beat him for pace repeatedly, and had even drawn and outside edge when Taylor was on 35, only for the gully fielder to grass the low chance.

After tea, Taylor’s pace quickened – the singles coming more frequently than before, and Cummins even suffering two disdainful pulls for four in front of square. Having got out on 93 at the Basin Reserve, Taylor didn’t dally long in the nineties, taking only nine deliveries to move to triple figures. In addition to having equaled the New Zealand record, this is a special ton for Taylor: his longtime friend and mentor Martin Crowe had said Taylor would reach and surpass his own tally of 17 centuries.

Earlier, West Indies had had a brief opportunity to spark a New Zealand collapse, when they dismissed the openers with 42 on the board, but Williamson’s energetic innings sucked the worst of the venom out of their bowling. Having arrived at 11 for 1, Williamson began to leave the ball judiciously, and defend with assurance. He batted out 26 balls before the expansive strokes began to appear. His two first boundaries were made possible by fielding errors at point and deep square leg, but then the 33 balls he faced before lunch yielded 42 runs. His fifty was brought up via a leg glance to the fine leg boundary immediately after he had socked Shannon Gabriel past mid-off. It was an important score for Williamson, for he had gone five international innings without a fifty – a significant stretch for such a consistent batsman.

Elsewhere in the New Zealand innings, batsmen got starts and were undone when more substantial scores beckoned. Tom Latham, Mitchell Santner and Colin de Grandhomme all made it past 20 before being dismissed, generally by very good West Indies bowling. None of the dismissals seemed to dent New Zealand much, so secure were they already in the game. When Williamson declared, New Zealand had made 291 for 8 in the second dig.

As had been the case at the Basin Reserve, West Indies’ first-innings indiscretions meant that they began the second innings with only a miniscule chance of avoiding defeat. That chance would become worse before stumps. Kieran Powell was out for his second duck of the match – squared up by a short delivery from Boult that took his edge and flew low to third slip. Shimron Hetmyer sparkled briefly again, playing a dismissive pull and a searing on-drive for four, but he was out cheaply again, just lofting a full Tim Southee delivery into the hands of mid-off.

West Indies must take heart from their successful pursuit of 322 at Headingley earlier this year. The target in front of them now, however, will take even more grit and resilience – the likes of which they are yet to show for an extended period, on this tour.