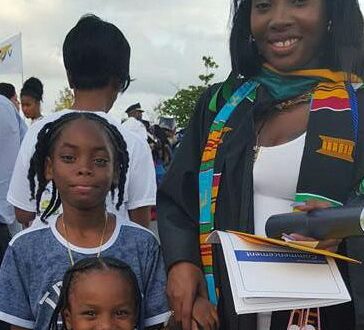 ST. CROIX — V.I.P.D. Public Information Officer Glen Dratte told The Consortium late Thursday that detectives were able to identify Lyana Serieux once she was removed from a cistern of an abandoned house located behind the Mutual Homes Housing Community in Grove, by a tattoo and bracelets that she wore. Ms. Serieux had a tattoo on her left shoulder area.

The body was discovered at about 2:00 p.m. on Thursday, according to Police Commissioner Delroy Richards. Because the cistern was filled with water, the Waste Management Authority used one of its vacuum trucks to remove the water so that St. Croix Rescue personnel could go in. The body was removed during the 7:00 p.m. hour, and confirmed to The Consortium around 8:00 p.m. on Thursday.

What is now one of the most heinous crimes committed in modern Virgin Islands history, started on Friday, the last day Ms. Serieux along with her two sons were seen. Ms. Serieux’s family members had conducted their own search, but turned to police on Sunday after futile attempts. By Monday night at about 7:30 p.m., police discovered a 2011 Silver Toyota Yaris with license plate number CFR 304 — confirmed to be that of Ms. Serieux — burnt in Upper Love.

The following day at about 11:35 a.m., moments after a V.I.P.D. press briefing seeking the community’s assistance, the bodies of Ms. Serieux’s two minor sons — 10-year-old Jordan Serieux and 5-year-old Jeremiah Serieux — were discovered on the south shore near Ha’Penny Beach. The tragic nature of the discovery rocked the territory, with many expressing disbelief that such cruelty had occurred here.

The search continued for Ms. Serieux on Wednesday. On Wednesday evening, some residents gathered at Fort Christianvaern for prayer, and were joined by tens of thousands more from around the world. “I stand with you in prayer from Jerusalem,” said Hannah Jasmine McCoy. “Prayers from the Santos family from East Tennessee,” said Mario N. Wendy Santos. “Praying and standing in agreement in Indianapolis,” said Claire James.

The Buccaneer Hotel has started a reward fund with $5,000, which is to be rewarded to anyone providing information leading to the arrest of those involved. The fund is expected to grow as more organizations and individuals join the cause.

Commissioner Richards said that the force has been following every lead it gets — down to comments online — to try and piece together what really happened. “So far we have been unable to confirm a lot of them,” he said. He did, however, confirm that items of “evidentiary value” were discovered in the abandoned building.

Governor Kenneth Mapp has not issued a statement addressing the incident. Lieutenant Governor Osbert Potter, during a press briefing on Tuesday, expressed confidence in the V.I.P.D.’s ability to bring those involved to justice.

The killing of Ms. Serieux and her two minor sons brought the territory’s homicide count to 37 for 2017. By August 29 last year, the territory had already seen 47 homicides in total, 40 of which were gun-related and another 7 were vehicular.