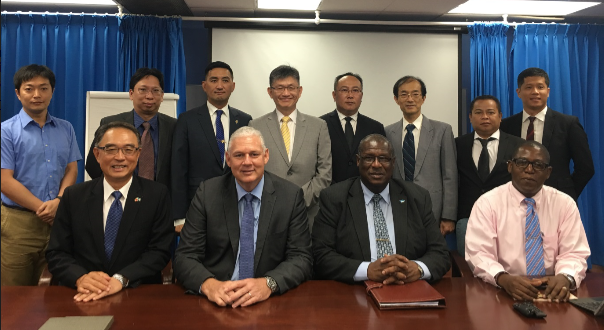 [Press Release]  Arranging by the Government of the Republic of China (Taiwan), an eight-member delegation of engineering experts visited Saint Lucia from 1st to 9th May, 2018 to conduct feasibility studies on the redevelopment of Hewanorra International Airport (HIA) and road rehabilitation projects.

During their visit, the delegates called on Prime Minister Hon. Allen Chastanet, Hon. Stephenson King, Minister for Infrastructure, Ports, Energy and Labour, and met with Saint Lucia counterparts to exchange views on the design and implementation of the two projects.

At the meeting on May 9th, Prime Minister Chastanet stated that Saint Lucia is experiencing steady growth in the tourism industry, as tourist arrivals continue to rise, HIA has reached its capacity. He added that the redevelopment of HIA is critical and hopes to see the project commence as soon as possible. Regarding the major road project, Prime Minister Chastanet noted that local road network has deteriorated badly over the years due to extreme weather events; it is imperative to ensure the road safety of Saint Lucian people. The Prime Minister looks forward to the expertise and input provided by the Taiwanese experts.

Taiwanese Ambassador H.E. Douglas Shen stated that the government of Taiwan will work with Saint Lucia to facilitate the financing and construction of the two major projects. He believed that the cooperation will not only serve to stimulate economic growth, but will also create more than 2,000 job opportunities. Ambassador Shen reiterated that Taiwan’s commitment towards its allies and reaffirmed his government’s intention to further strengthen the mutually beneficial relationship between the two countries.