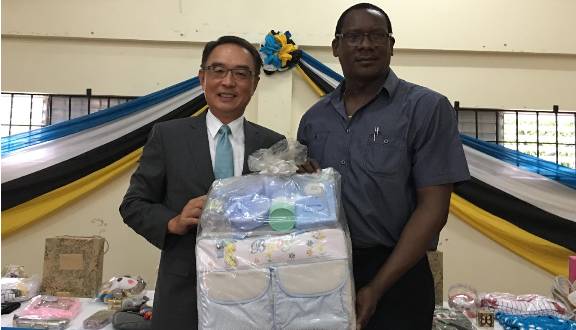 [Press Release]  His Excellency Douglas Shen, Ambassador of the Republic of China (Taiwan) to Saint Lucia, handovered a full container of charity supplies to the Honourable Lenard Montoute, Minister for Equity, Social Justice and Empowerment at a ceremony held at the Chase Gardens Human Resource Development Centre on March 28, 2018.

The charity supplies were donated by Simplyhelp Foundation, a Taiwanese-American NGO based in Los Angeles.

Speaking at the event, Ambassador Shen praised Simplyhelp Foundation for its generous donations and vowed to continue working with the Foundation to provide assistance to Saint Lucian communities in need. Ambassador Shen pointed out that Simplyhelp had cooperated with Taiwan Government in contributing over 800 thousand EC dollars in goods to the people of Saint Lucia since 2015. This year Simplyhelp donated 300 boxes, which is worth nearly 200 thousand EC dollars. The items include shoes, kitchen wares, clothing, toys, baby supplies, soccer balls, stationary and LED lights.

Hon. Lenard Montoute addressed the needs and the challenges of the local vulnerable groups and expressed his deeply appreciation for the consistent contribution from Taiwan government and the Simplyhelp Foundation.

Minister Montoute assured Ambassador Shen that the supplies will be provided to the most needed people on the island, and he looked forward to more fruitful collaborations between the two countries.

Simplyhelp foundation was formed in 2000 in Los Angeles and is active in 23 countries with a strong presence in Central America and the Caribbean. It is founded by Mrs. Tina Bow, a Taiwanese American, dedicated to relieving poverty by providing emergency disaster relief, vocational training, and care for homeless elderly.

2018-04-06
Previous Azeez Steps Down from SLHTA
Next WAS SCL GROUP INVOLVED IN UWP’S 2011 ELECTION CAMPAIGN?