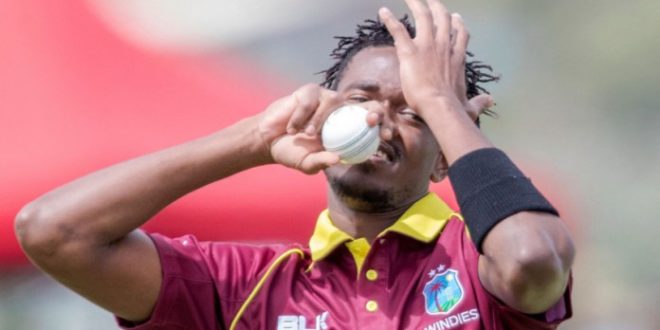 [SPORTSMAX] Ronsford Beaton, who has been banned from bowling in international cricket after failing an independent assessment of his bowling action, has been included in Cricket West Indies’ fast-bowling camp now on in Antigua.

“In accordance with the regulations, Beaton’s international suspension will also be recognized and enforced by all National Cricket Federations for domestic cricket events played in their own jurisdiction, save that, with the consent of Cricket West Indies, Beaton may be able to play in domestic cricket events played in the Caribbean under the auspices of the CWI,” the ICC said in a statement Tuesday.

The response from CWI was almost immediate.

“Cricket West Indies wishes to acknowledge a report from the International Cricket Council (ICC) regarding the suspension of fast bowler, Ronsford Beaton. The ICC is reporting that Beaton has failed an independent assessment and will not be permitted to bowl in international cricket,” a statement from CWI said.

“Beaton will, therefore, join the fast bowling camp now on in Antigua as part of his remedial program, following which he will undergo a reassessment process, which if successful, he will be allowed to participate at the international level.”

Director of Cricket, Jimmy Adams says CWI is fully committed to working with Beaton during this period of remedial work which will hopefully accelerate his successful re-admission to the professional game.

Beaton was reported for suspect action during the second ODI against New Zealand last December. The ICC noted that the international suspension will also be recognized and enforced by all National Cricket Federations for domestic cricket events played in their own jurisdictions; but with the consent of CWI, Beaton may be able to play in domestic events in the Caribbean.